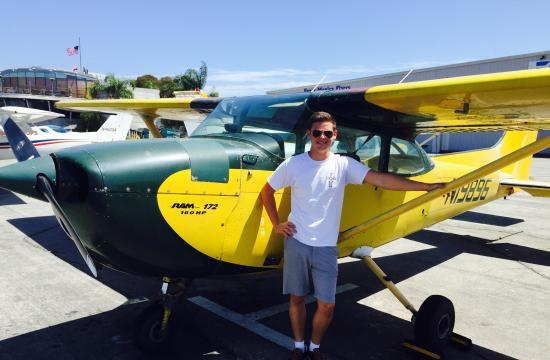 Harrison Ford, Tom Cruise, and Arnold Schwarzenegger are among famous celebrities who have owned small airplanes and in some cases flown out of the Santa Monica Airport.

But there are many other, less-famous people who also use the local airport to fly small solo planes. One such person is 16-year-old Santa Monica resident Dante Gaudet. He might be the only person in his high school class that can brag to his classmates about flying a small aircraft.

“To me it’s a very freeing feeling,” Gaudet said about being a solo pilot. “I’ve always looked up into the sky and wondered how planes fly. It started my curiosity.”

Perhaps it was destiny as well, as he lives within walking distance of Santa Monica Airport. Many of his days as a youth were spent watching planes takeoff and land around the grounds, and from there he was set on his path.

“Dante had a great understanding of airplanes at an early age and a real interest in aviation,” said his father, Dirk. “So that kind of started the whole conversation (about flying).”

Dante was introduced to aviation through the Young Eagles Program in Santa Monica. He started training to become a pilot at age 10, about the minimum age required, according to Dirk. At 16, Dante was finally able to get his license to fly solo, and next year he’s hoping to pass tests to fly others around.

For now, Gaudet operates small planes and often flies to other neighboring airports like Van Nuys and back to Santa Monica. He can reach heights up to 9,000 feet and flies high above the ocean and Hollywood area.

Dante said it’s important for pilots to have quick reactions, and the most challenging part about flying is “multi-tasking” and “being able to stay calm under difficult circumstances.” All pilots are required to watch weather reports and Dante says pilots are taught not to fly if visibility is poor.

So far, he’s passed all tests. After high school Dante plans to go to college (perhaps Stanford) and his dream is to someday become an aerospace engineer.

“I don’t really want to be a pilot for commercial purposes,” he said.

Right now he’s just content to fly the friendly skies in small planes around Santa Monica. His father, Dirk, is obviously proud of everything his young son has accomplished so far.

While Dirk is a landscape artist by profession, he describes himself as an “aviation enthusiast.”

Both father and son share a passion for airplanes, but Dante is the one who actually pilots planes in the sky. He’s hoping to someday meet Harrison Ford and said he’s a fan of “Indiana Jones” and “Star Wars.” After all, how cool would it be for anyone to fly alongside Han Solo?