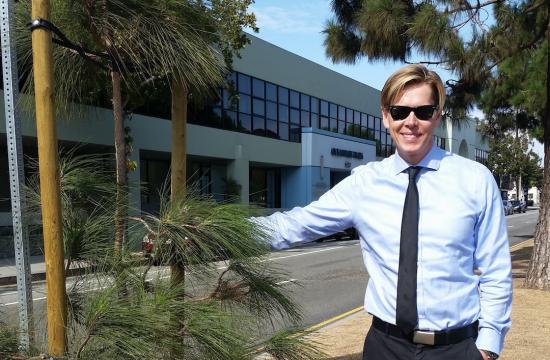 According to a 2015 research study by the U.S. Forest Service, Santa Monica’s trees deliver $5.1 million worth of benefits by cleaning the air, increasing property value, and reducing energy use.

Santa Monica’s Urban Forester Matthew Wells said he is pleased with the new number as it is significantly higher than it used to be.

Although it may seem like Santa Monica doesn’t lack trees, Brock said the drought has affected them. He firmly believes there is a need for more because the city has lost around 100 trees.

“Our tree coverage is only 16 percent,” Brock said. “New York City is 28 percent and Los Angeles has more tree coverage than we do.”

Wells points out that Brock’s numbers are based on a 2001 United States Department of Agriculture (USDA) study. Wells said NYC’s tree coverage is now 21 percent according to a more recent report.

The city, Wells said, has commissioned University of California, Davis and USDA Forest Service to complete an updated canopy study that is estimated to be completed in fall 2016.

Wells said it would allow them to make an informed decision of what the city would like the tree coverage to be.

Although the tree coverage is uncertain, Wells said a 2015 USDA report from the Forest Service calculated that Santa Monica has nearly twice the number of street trees per mile. This means the trees generate more than three times the volume of benefits compared to 12 other Southern California Coast cities.

Because of their importance, Brock said they need the public’s help to save trees now more than ever.

Without proper watering during the drought, Wells said trees are susceptible to stress, which causes them to underperform. Underperforming trees, Wells said, do not provide the same benefits as those that are healthy.

To maintain trees during the drought, Wells said the Urban Forest Task Force has created a guide at www.smgov.net/portals/urbanforest. “How to Help Urban Trees Survive a Drought” provides solutions to not only make it easier for residents to conserve water, but also keep their trees functioning.

“We always encourage the use of the guide to help our urban forest,” Wells said. “Any effort with the city’s trees will go a long way.”

For young trees, those that are five years old and younger, Wells encourages the use of water bags. The bags are commonly seen throughout the city.

The water bags hold up to 20 gallons and can be zipped around a tree or a stake. Wells said the water will then seep out to wet the soil and the moisture will reach the desirable root absorption depth.

Water bags cost $20 and can be purchased at home improvement stores and internet retailers.

Because of a mature tree’s extensive root system, Wells said they require more water than younger trees. The general rule for older trees is 10 gallons of water.

If a tree’s species is unknown, the Task Force recommends minimal water frequencies, which requires watering twice a month.

To continue the city’s water-saving initiatives, Wells encourages residents to use mulch. Mulch consists of wood chips, grass clippings or straw and helps conserve moisture. Wells says residents should use four inches of mulch under the tree’s dripline. The dripline is the area directly below the tree’s branches or canopy.

“Mulch reduces the use of irrigation by 50 percent,” Wells said. “It also improves the health of the tree.”

Limited irrigation is necessary with Santa Monica’s water-saving initiatives. In June, the city achieved a 52 percent reduction of water compared to same month in 2013. Some of the methods used to save water involved spreading a thick layer of mulch over planted areas and removing unnecessary grass around trees.

In regards to the future of the urban forest and the benefits it provides the city, Wells says the future is bright. Every dead tree is replaced and additional new trees are added. The Task Force also moves trees if construction conflicts arise or if they are at risk of dying.

For more information about the urban forest or to report a tree, call 310.458.8974 or visit www.smgov.net/portals/urbanforest.