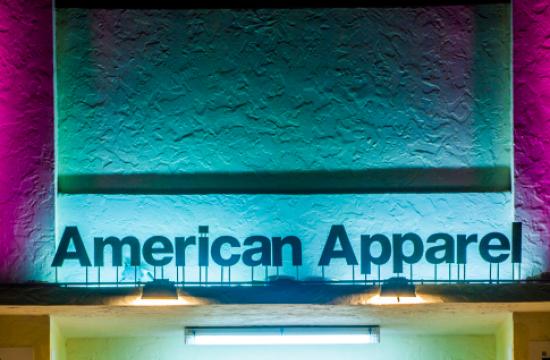 One day after filing for Chapter 11 bankruptcy protection, Los Angeles-based clothing manufacturer and retailer American Apparel announced today that the New York Stock Exchange is suspending trading in the company’s stock immediately and beginning the process of delisting its common stock.

American Apparel said it has received a notice from the NYSE informing it that the exchange has determined that “the company is no longer suitable for listing….”

The pre-dawn announcement by American Apparel came one day after the company filed for Chapter 11 protection in U.S. Bankruptcy Court in Delaware.

The NYSE notice states that in reaching the delisting determination, the exchange “noted the uncertainty as to the timing and outcome of the bankruptcy process, as well as the ultimate effect of this process on the value of the company’s common stock,” said the company statement, adding that American Apparel “does not intend to appeal the delisting determination.” It added:

American Apparel said Monday it was filing for bankruptcy after reaching a deal with 95 percent of its secured lenders. The restructuring agreement will take the company private and hand nearly 100 percent control to its largest bondholders.

Among the shareholders who will be forced out by bankruptcy proceedings will be founder Dov Charney, who was ousted last year as chief executive and chairman amid allegations of inappropriate behavior involving employees and financial misconduct.

Paula Schneider, who came aboard as chief executive in January, said filing for Chapter 11 was the right decision for American Apparel as it carried more than $300 million in debt.

But analysts said that despite the reduction in debt, American Apparel’s underlying problems remain: lackluster product offerings, too many stores and high production costs, with about 4,600 manufacturing and sewing employees in Southern California, the Los Angeles Times reported.

Schneider says she plans to continue with a turnaround plan that includes freshening up products, streamlining offerings and reducing costs, according to The Times.

For the last several months, American Apparel has been focused on launching fall fashions that were supposed to showcase the company’s new creative direction. But because of the cash crunch, only about 15 percent of the new products were made, Schneider said.