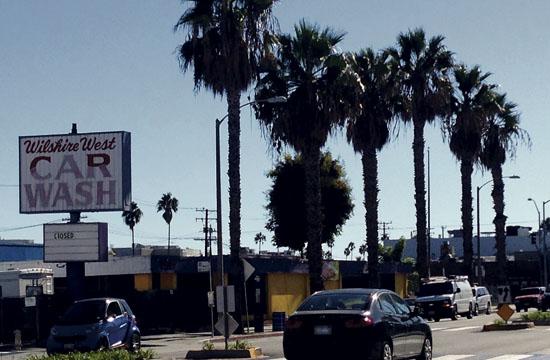 The site of a former car wash across the street encapsulates that transformation, he said on a recent weekday afternoon.

A three-story combination of retail and apartments has been proposed by commercial real estate company CBRE.

“If it passes, it may change the face of Wilshire Boulevard,” said O’Sullivan. “The fear of small business owners is that the city will outgrow us.”

The location is listed as a pending project on the city’s website. Calls to the planning department weren’t returned.

Wilshire West Car Wash, which closed a couple of months ago, made headlines in 2013 when the city attorney’s office accused the manager and a supervisor of violating labor laws. The defendants pled no contest and the car wash was ordered to compensate 75 former and current employees with back pay totaling about $660,000.

Now employees of the nearby Whole Foods park in the empty parking lot.

Advertisements for a pumpkin patch cover the car wash’s sign, which reads, “Closed.”

Although O’Sullivan said he had “mixed feelings” about the development, he also said he could also see some potential upsides.