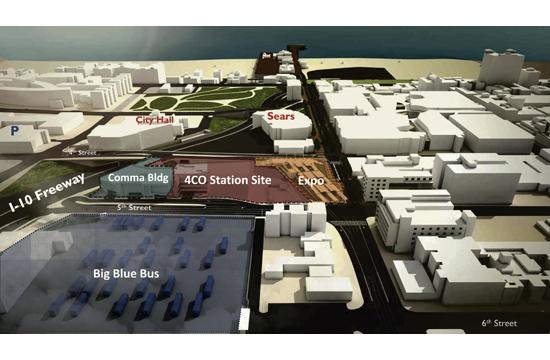 Anyone who’s been in the vicinity of 4th Street and Colorado Avenue has noticed an extreme amount of change in recent years with the completion of the terminus station of the Expo Light Rail Line nearing.

This City-owned site is perceived by many as the gateway to the distinctive places that make Santa Monica unique. This intersection marks the western entrance from the Interstate 10, access to the Santa Monica Pier, and the southern edge of the Promenade and Santa Monica Place shopping districts.

People seeking these destinations and the adjacent Tongva and Palisades Parks pass through this intersection on foot, bikes, buses, in cars, and in less than a year, via train.

On Tuesday night, Santa Monica City Council held a study session that discussed the emerging draft long-term use objectives for the 4th/Colorado property.

At the end of the near 90-minute discussion, Mayor Kevin McKeown read a motion recapping the study session’s main points. The Council unanimously approved a motion to direct City staff to examine the following:

• Indicate interest in prioritizing a flyover

• Deemphasizing a 4th and 5th Street cut through

• Studying traffic flows both in and out of the site

• Planning the uses first, then make the form follow the function

• Considering a direct link between the freeway and parking

• Looking at the advisability of the office near transit

• Evaluate all this in the context of the Gateway Access Masterplan

• Keep the capping of the freeway not just the flyover on council’s agenda.

The history of planning this intersection spans a decade. In 2005, the Council approved a Civic Center Specific Plan that included the station site and a new Olympic Drive to expand the Downtown/Civic Center circulation network (completed 2014).

In 2006, the City acquired the properties located at 1632-36 5th Street and 402 Colorado Avenue. At the time of purchase, the terminus station of a future light rail line was considered for this site.

With light rail now in place, the site is a key location in Santa Monica.

The station currently occupies approximately 34,000 square feet of the site. The remainder City owned portion (approximately 86,250 square feet) and the adjacent properties, have constrained access because the station occupies the former access to Colorado Avenue. Because of the complex circulation infrastructure at this junction (an interstate freeway, a bridge, light rail, city streets, and sidewalks), careful consideration and planning is now in progress to optimize integration of future transit-oriented uses on the site, such as office, retail, and commercial businesses; parking; affordable housing; and/or other public uses.

Community outreach identified a desire for creating a place of arrival and departure that honors the Santa Monica identity while also providing longterm improvements to the City’s transportation infrastructure.