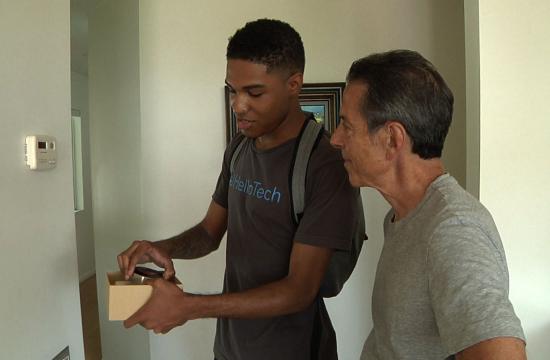 Tech support can be a complex and expensive process, with the most well known in-home service, Best Buy’s “Geek Squad,” sometimes requiring a wait of up to five days for help.

The service charges an hourly rate of $79 for a team to drive over and assist with tech problems ranging from internet speed to home theater installation.

The company has seen a lot of success since its May launch and recently expanded its service to cover parts of Orange County as well as most of L.A.

The company just raised an impressive Series A round of $12.5 million led by Madrona Ventures.

Techs are booked online, and are available to come within 24 hours of booking, if not on the same day. HelloTech employees also have ratings and transparency on their individual expertise, similar to the Uber service.

HelloTech initially only worked within a seven-mile radius around UCLA and Westwood, but recently announced their expansion into Los Angeles and the Westside.

According to HelloTech’s Vice President for Marketing Steve J. Hartmann, HelloTech was partly inspired by its founders being tired of being their relatives tech solution, or having to send said relatives’ simple tech problems to slow and expensive services.

The company is currently marketing via the internet, local media, and word-of-mouth towards residents in their 50s and 60s who may not know where to go.

“With the ‘Internet of Things’ more cool technology is available for the home than ever before,” Wolpert said. “This is both a very exciting and potentially very confusing time for homeowners. HelloTech will take the confusion out of the equation.” And while the primary goal of HelloTech is not to upsell people on technology, technicians will give their customers information on upgrades when appropriate.

HelloTech also presents itself as a unique employment opportunity, since all of its current techs are college students, and computer science departments at schools such as UCLA and ITT Tech are where the service goes to recruit new employees.

HelloTech has also found technicians through ads on websites such as Facebook and Craigslist. New technicians are interviewed and vetted before being put through a three-step training process and joining the HelloTech team.

Techs are well paid, receiving up to $30 an hour for work they are already experienced in.

“This age group lives and breathes this stuff already, they study it and have already been helping out their family,” Hartmann said. “Plus, it’s a cool, well-paying job that lets them use their skills, and gives customers the feeling of helping out students.”

When on a scheduled visit, the techs are ready to handle a multitude of issues, even if the customer is not sure what is wrong. “It would be great if people were always completely specific about their problem,” Hartmann said. “But that’s why we have our techs bring along cables, routers, and other equipment, so they don’t always have to leave and come back after they troubleshoot the issue.”

As HelloTech is fine-tuned and expands, technicians will also give customers pamphlets and recommendations on “smart home” technology like bluetooth speakers and thermostats and locks controlled through a customer’s smartphone.

HelloTech’s biggest issues right now are related to Wifi connectivity and slow devices, according to Hartmann.

The main challenge HelloTech faces right now is making people aware of its existence. But Hartmann believes that the company can become successful and well-known as a high-quality service that is cheaper and more flexible than larger corporate services like those at Best Buy or Apple.

HelloTech will match its growth with its employment strategy by seeking out students from other UC’s, as well as USC, CalTech, and some Cal State schools.

“Our goal is to really own LA and really be the first name in tech support in the LA Area,” he said. “Right now we are just making sure this early launch helps us fine-tune the service and spread it to Los Angeles and then eventually all of California.”