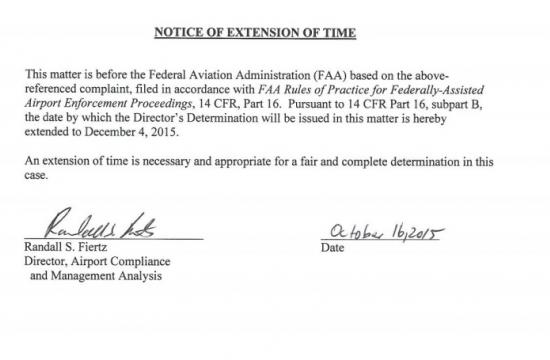 The FAA on Friday sent the City of Santa Monica the (above) attached notice. They are again postponing a decision on the crucial matter of grant assurances expiration that encumbers the land we own at the airport. The City stopped taking grants in 1994. Grants come with 20-year obligations.

We feel quite sure our grant assurances have been fully discharged, then, as of last year, allowing us control over land which even the FAA admits we own. The FAA, however, is trying to claim that some bookkeeping adjustments in 2003 extend our obligations to 2023.

There is a process for resolving such disputes, but the first step is an administrative action that takes place within the FAA itself. The FAA should have responded so we could move forward many months ago. The attachment is at least the third unexplained extension, and this extension is even longer than the previous ones.

Santa Monicans are confronted with a federal agency that is refusing to do the work American taxpayers expect. Our Congressman Ted Lieu is doing everything he can to assist, but the FAA is immovable, and, frankly, arrogant, in telling Westside residents concerned about their families’ health and safety that bureaucrats are just too unmotivated to provide a timely answer.

As I told the FAA in July when I visited DC, we will not be denied, we will not stop, and we truly believe that ultimately, we will prevail.