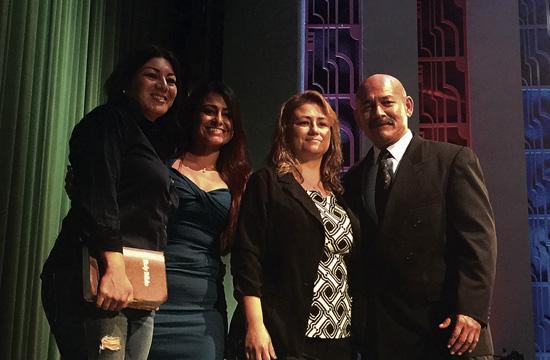 What do Abraham Lincoln, William Faulkner, Conrad Hilton, and Bill Nye all have in common? They were all postmasters, officers of the United States in charge of running an entire post office.

“We have our challenges coming up this year. My staff and I are fully committed to providing the services that this community deserves, and we have the talent to do so. I believe that Santa Monica has some of the most loyal employees.”

He also took the time to recognize his staff, his couriers, and union stewards.

“It’s a collaborative effort,” he said. “My postal career has come a long way. I remember my first day working the graveyard in Pasadena. Apprehensive, I didn’t know what to expect. I remember starting at 11 at night, and I remember at 3 in the morning wanting to go home. It was cumbersome, but I got used to it. I’ve been blessed to be a part of this organization for 23 years,” Villa said to the audience in Barnum Hall.

Villa started his postal career in 1993 as a mail handler at the Pasadena Processing and Distribution Center. Since then, he served various roles as manager and customer service supervisor throughout Southern California.

He has held assignments in Los Feliz, Eagle Rock, and Alameda, as well as serving as Customer Service Operations Manager for the Los Angeles Post Office. He was assigned as Officer-in-Charge at the Santa Monica Post Office in 2014, and officially promoted to Santa Monica Postmaster on March 7.

Of his goals, one of the most important was to improve and build on customer service relations.

“My customer base is large. It’s a demanding customer base, but I like it that way,” Villa said. “This organization has given, obviously, so much to me, and this is my way of giving back. I’m ready to take on the challenge of peak season … we were successful last year and we’re going to be even more successful this year.

“I have a lot of faith in what we do because we’re doing what has been done for 200 years.”