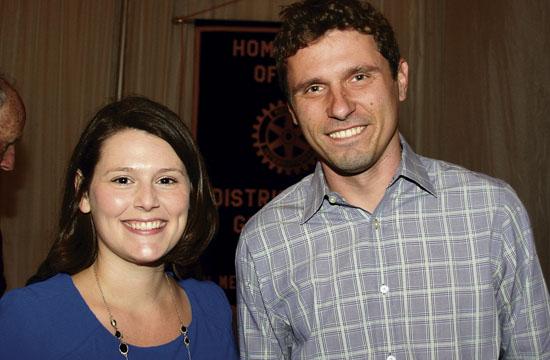 Africa is where we first evolved, and where we have spent the majority of our time on Earth.

Using genetics to trace human migration patterns, scientists and anthropologists have traced a map of the human journey. And using the National Geographic Project, people have helped answer fundamental questions about where humankind originated and how we came to populate the Earth.

The National Geographic Project, about a decade-old anthropological study that uses DNA voluntarily contributed by hundreds of thousands of people to answer the oldest questions we have about ourselves: Who are we and where did we come from? In doing so, the project has gone on to create the world’s largest survey of DNA samples to map how humankind populated the planet.

So far there have been 742,652 participants in the genographic project in over 140 countries.

But before some could share the story their DNA told, Rotarians first were primed on how this science worked.

Dr. Bogdan Pasaniuc, professor at Geffen School of Medicine, UCLA, in Pathology and Laboratory Medicine, explained the uses of modern DNA to understand the history and evolution of the human species.

Through his research, Bogdan is primarily interested in statistical and computational methods for understanding genetic risk factors for common diseases with a particular focus in the study of admixed populations.

“Each chromosome has all the information that we need for our cells to function,” he said. “Although you don’t have to go through all the details to understand this, within the chromosomes there’s this molecule called DNA which is formed from other, smaller molecules. It’s a blueprint of everything that we are.”

Following his presentation was about a quick tour of the results of the National Geographic Geno Project from four Rotarians.

Geno 2.0 Next Generation Genographic Project Participation and DNA Ancestry Kit costs about $200. It uses a custom-built genotyping chip that enables a test of nearly 750,000 DNA markers, many of which have been specifically selected to provide highly detailed ancestry-related information.

The test kit involves a painless cheek swab and instructions for submitting the DNA. From this, you will discover the migration paths your ancient ancestors followed hundreds – even thousands – of years ago. You will also learn what percentage of your genome is affiliated with more than a dozen regions of the world. But perhaps most importantly, you will have the opportunity to share your story and connect with other Genographic Project participants, and help National Geographic fill in the gaps in the human story.

Anthropologists believe that humans only started to leave Africa between 60,000 and 70,000 years ago. With a major climactic shift happening around that time – the Ice Age – genetic and paleontolical records point to humans (or what was left of them) then made the great migration out of Africa.

Before that, however, Homosapiens lived with other human species in Africa for about 200,000 years, Loo said.

There was another group that left Africa that went to European and Asian areas and became other species, Loo said. Two of which were Neanderthals and Denisovans

“We all have Neanderthal DNA in us in varying degrees,” Loo said. The Denisovans are named after a cave in Russia where they found a finger fragment of a primate, and after testing it for lab DNA they concluded it was another species in 2008.

The Denisovans split off from the lineage of Neanderthals 200,000 years after humans had already had their split from the species.

“And guess what: we all have Denisovan DNA within us,” Loo said.

Nat Trives traced his own ancestor’s migration patterns, but the results were less important than what they signified.

“What’s important to me is that this project opened my eyes to the fact that I have always believed – and now even more strongly – that we are all human beings from the same root, and we should strive to live on this planet in a peaceful manner,” he said.