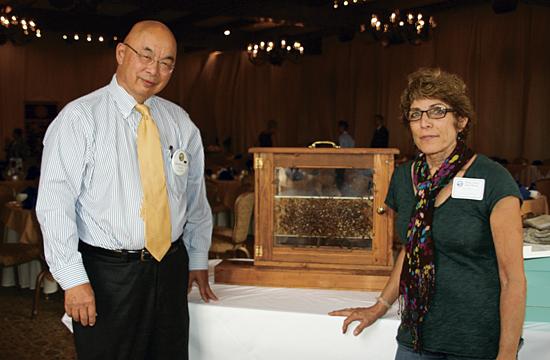 When the Los Angeles City Council voted to legalize urban beekeeping last week, they overturned a 136-year-old ban on the practice going back thousands of years.

Fitting, a full-time beekeeper was at Rotary Club of Santa Monica Friday, Oct. 16 to discuss the curious lives of bees and their impact on the L.A. ecosystem, household, and economy.

Ruth Askren has been keeping bees in and around L.A. since 2009. What started out as a hobby to spend more time with her father has turned into her own business, Bee Capture. From mid-city to Point Dume, Askren has provided beehive removals and relocations, but today, she mainly focuses on hive maintenance and mentoring.

She began her talk to Santa Monica Rotarians about how Africanized honeybees came to the L.A. basin.

“In 1957 a Brazilian scientist imported some bees from Africa in an effort to make beekeeping in South America more profitable because all the South American apiaries were using European honey bees, which are used to a colder climate. Unfortunately, a lot of those African queens escaped and it took them about 40-50 years, and they’re here,” Askren said. “And now they have interbred with the larger European honey bee population in Los Angeles, and we have something wonderful called hybrid vigor, which is the Africanized honey bee’s ability to survive a lot of the disease onslaughts that the European bees cannot survive. But it’s true: they have a more aggressive temperament.”

This is why beekeepers like Askren who are keeping feral bees have a heavy task at hand. There are always bee rescues to be done around L.A.

“We find ourselves on the forefront of trying to tame the population,” she said.

Askren, who previously taught at Notre Dame Academy, spoke with such deftness that one would think she’s been doing this her entire life. She then turned to bee biology, something a beekeeper has to be keenly aware of if she wants to control the hive.

In the hive, she explained, all the bees except the drones have jobs.

“Well, the drones do have one job and that job is to find a queen to mate with. Only about 10 percent of the hive is drones. Meanwhile the females do all the work,” she said.

There are three types of bees: the worker, the drones, and the queen. The worker bee can live somewhere between four to eight weeks, going through different work cycles throughout that time. From receiver bees to guards to housekeepers then forages, the worker bee’s life is determined by how long her wings will last.

“The worker is the smallest one, and her abdomen is pointed, you can just see her stinger there. The next size up is the drone, whose got a blunt, hind end and he does not have a stinger. He has big eyes, they take up most of his head because his main job in life is to look for and find a queen, along with 15 or 20 of his brothers,” Askren said.

The drones die directly after mating. In fact, they cant even feed themselves, which is why they get kicked out of the hive at the stress times of the year (when the weather changes.)

And then there’s the queen bee. She has no stripes on her body and will always have a little dot of paint on her signifying her age for the beekeeper.

Queens can live for two to five years. In a very good spring season, she can lay up to 2,000 eggs a day.

“And yet commercial beekeepers do like having 1-year-old queens in all of their hives because they are the most productive. And each year that a queen is alive, her production will fall off slowly but surely. However, it’s worth it to keep and older queen around because some of them have within their genetic code a lot of strength and resistance to disease that is very sought after,” Askren explained.

Lastly, budding beekeepers must decide how they will deal with varroa mites, or “the new biggest challenge to the bees.” Askren said that today, it’s widely accepted that these mites are what causes colony-collapse disorder, a 25-year-old phenomenon that bees in the U.S. haven’t developed immunities to. The varroa mite’s lifecycle matches a bees, so larvae are born with these red dots all ready on them.

“A viral syndrome races through the hive and can kill all the bees in very short order,” Askren said. “We have to make the decision as beekeepers as to how we’re going to treat the mites. There’s a treatment-free community that believes all medicines for mites are bad and harms all bees and should allow sick bees to die – it’s called bond beekeeping,” she said.

But most commercial bees understand they have to deal with bee treatments, and they use a miticide similar to what one would use for fleas or ticks on pets.

“Beekeeping is multi-faceted and it can be a craft and a pastimes as well as business,” Askren said.

To learn more about beekeeping, visit Askren’s business at beecapture.com.