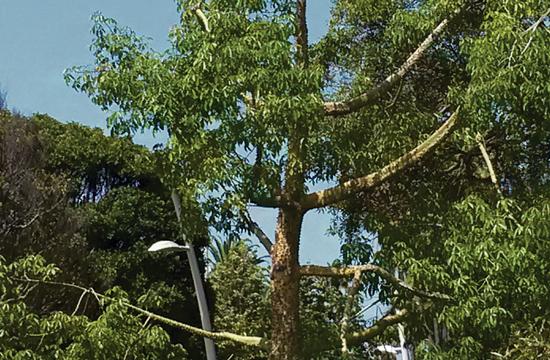 The Lorax speaks for the trees in the fantasy world of Dr. Seuss.

In the real world in Santa Monica, Urban Forester Matthew Wells is the person in charge of making sure that trees remain a vital part of the community.

The City of Santa Monica has more than 33,000 street and park trees, but it’s a small group of trees that’s been getting the most attention over the past few years. In 2012, seven trees valued at $50,000 were transplanted to different areas of the city to make room for a development project at 525 Broadway.

“It was a successful project,” said Wells, who took over as Santa Monica’s Urban Forester about two years ago. “It’s a nice way to try and preserve trees instead of having them cut down and destroyed. When you transplant trees there’s always an establishment phase. It takes a while for trees to get accustomed to a new home.”

A total of four Purple Plum trees were moved to a new home at the junction of 17th St. and Pico Blvd., at the edge of a cemetery across the street from Santa Monica College.

“They have deep purple foliage and are very nice ornamental trees,” Wells said, adding they are smaller trees reaching a height of about 20-25 feet. Three of the Purple Plum trees have been located and the other tree is assumed to be doing fine as well.

“We track all the trees in the city from a data base,” Wells stated.

Two large Jacaranda trees were transplanted to Woodlawn Cemetery. In many parts of the world – including Los Angeles – the blooming of this striking tree is welcomed as a sign of spring. The Jacaranda can get reach great heights.

“That tree is really beautiful and is in a nice section of the park,” Wells said. The awkwardly branched tree with green leaves can grow 30-60 feet high.

While the transplanted trees appear to be doing well in Santa Monica, overall the drought in California has caused some problems.

“Certain trees are declining because it’s much drier than they’re used to,” Wells said. “It’s basically creating a lot of stress for trees. When you get stress you get lower levels of growth. And trees become more susceptible to disease problems. So in general it’s becoming more challenging to get your trees established.”

Wells added that water is the most important element for trees, as with all life. He’s hoping the predicted El Niño weather pattern will bring much-needed rain to California.

“Overall, people are hopeful it might recharge the soil which could benefit trees next year,” he said.

A 2015 research study by the U.S. Forest Service calculated that trees annually deliver millions of dollars worth of benefits to a community by cleaning the air, increasing property value, and reducing energy use among others.

For more information go to www.santamonicatrees.com.