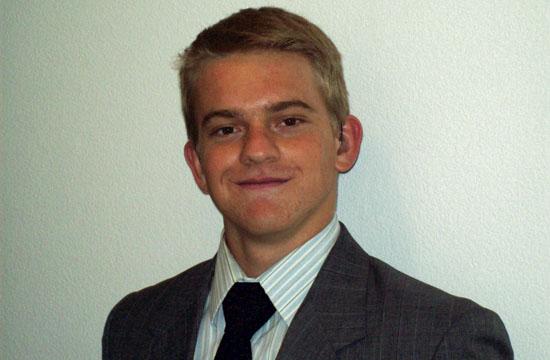 Held by the Santa Monica Chamber of Commerce, the 21st Annual New Heroes Celebration is an opportunity for the business, community, and city to welcome Santa Monica’s newest educators, firefighters and police officers.

Every year Inspirational Heroes from Santa Monica are honored for their tremendous contributions and outstanding work in the community.

The honorees this year are Karen Humphrey, Program Supervisor of Santa Monica Police Activities League; Sam Ruiz of the Santa Monica Fire Department; and the 2015 Young Inspirational Hero Award will be presented to John Butchko, a SMMUSD student and Hearing Impaired Advocate.

Get tickets and more information, at smchamber.com/new-heroes-celebration.

I was born in Santa Monica and have lived here my entire life.

I play on an AYSO soccer team. I was on the Santa Monica High School soccer team until I stopped to run for the Associated Student Body where I help organize school rallies, speakers, and fundraising activities. I am also a member of the Delians honor society at Samo. I am also a member of the Santa Monica Chapter of Hearing Loss Association of America.

I did not intend to be a role model. For years, I was not able to go to movies with my friends because I am deaf and it is almost impossible to make out dialogue in movies if you have any significant hearing loss. Movies are a critical part of the culture for the American teenager, and since I couldn’t hear, I missed out on a lot of pop culture. Although captioned films were being shown across the country, none of the blockbuster movies in Santa Monica were captioned. I could have used the legal system to force AMC to put in captioning but instead turned to my community to encourage AMC to do the right thing.

My father is my hero because he is altruistic, humble, and cares about others. Not only is he a great father, he is a great man.

I admire Mark Merrill, one of the founders of Riot Games, because he developed a free multiplayer online game that is exciting and challenging to play whether you are a beginner or a skilled gamer. Through his game, he was able to unite hundreds of thousands of people all over the globe from every culture, race, and age.

I was looking for work in Recreation and a friend of mine told me to contact Anita Ybarra. I was so weird because normally you would come in to apply for a job, but Anita was kind enough to send me the application. I interviewed and I was hired on May 26. I started off as a Recreation Leader working at Franklin Elementary and after five years I applied with PAL and that’s all she wrote! This is the best job I have ever had! I love it!

I have so many kids that depend on me for advice. My decisions and guidance can make or break a kid’s way of thinking. So it is important that the advice and tools I share with them are going to lead them in the right direction. Giving them the life skills, helping them to set short and long term goals and how to apply them is important. Staying positive and always giving words of encouragement is the key. I always tell the kids to center yourself around people that you want to be like. I must be doing something right because PAL has a number of former PAL youth that are working for the City of Santa Monica in recreation.

Jesus Torres, a former PAL kid. He suffered a serious drowning accident that almost claimed his life in June of 2013 just six days after graduating from University of Santa Cruz. After being in the hospital for over three months, and two months in a rehabilitation center he was able to come home. He has a long road to recovery and has made incredible strides considering that he flat lined twice in the hospital.

His dream was to complete 10 LA Marathon’s consecutively. Having completed seven marathons already he really had a strong desire to continue by participating in the 2014 Los Angeles Marathon. Although, he is bound to a wheelchair, his siblings (also former PAL participants) would take turns pushing him until the last 15 yards where his goal was to walk across the finish line with the assistance of a walker. As my super hero, Jesus did what he set out to do and completed the Los Angeles Marathon on his own.

I admire my daughter Brooke. She is a strong willed woman. After having her first child at an early age she didn’t let that stop her from going to college. Being persistent on transferring to a four year university, Brooke went on to Mount Saint Mary’s College. During her time there she won just about every award the college gave. In her senior year she became pregnant with her second child. Without skipping a beat, Brooke graduated and was planning her next venture; graduate school. Keeping it a secret, Brooke applied for a Fellowship. Once she was selected for the Rockefeller Scholarship she applied to Loyola Marymount where she received her Master’s in Literacy and Language Arts. Not stopping there, she just recently received her Administrative Credentials from Charter and Autonomous School Leadership from California State Dominguez Hills. Why wouldn’t I admire such an incredible woman like Brooke.

I came to Santa Monica in November 2002 with eight of my fellow probationary rookies. I started at a part time academy that took eight months. We met every Thursday, Friday, Saturday, and Sunday. During this academy I had various interviews with local Fire Departments. I eventually was invited to interview for the Santa Monica Fire Department and made it through several rounds and got to interview with the Fire Chief. I was honored by the invitation to start a few weeks later.

I have been involved with the community since I was hired. I joined the many 1109 members with functions such as St. Baldric’s, Breast Cancer, Toys for Tots, and Spark of Love. As soon as I completed my probation I took over a program called Share the Holidays. This is specific to Santa Monica for more than 25 years. I have been organizing this event for 12 years and it is a huge part of who I am. Throughout the year we see families experience stressful times in their lives. We try and share some extra love during the holidays – this varies from bikes, games, gift cards, holiday meal packages to name a few things.

I realized the impact one person has on another especially a child. That said if I can make a difference with one child in what I do that’s it’s all worth it.

My father is my corner stone instilled commitment to help others and think selflessness other things are greater than ones personal being.

I look up to police officers, military men and women, and my fellow coworkers. Above all my hero was my father and he still has impact on my life as a father, husband, and friend to others.

I admire my wife – she is my fuel and the glue to our children. She plays a major role in my kids’ life and mine. She is an awesome mother, wife, and great friend. My wife plays the role of dad and mom when I’m gone. She is mentally strong and compassionate young lady with a great heart.