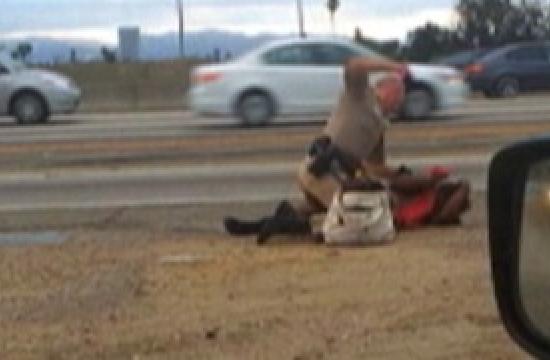 A woman whose 2014 beating at the hands of a California Highway Patrol officer along the Santa Monica (10) Freeway sparked outrage and lawsuits was taken into custody today in the same area where last year’s encounter took place.

Two CHP officers found Marlene Mardella Pinnock about 2:25 a.m. on the right shoulder of the La Brea Avenue off-ramp to the eastbound 10, near the very spot where she was repeatedly punched after being taken to the ground by a CHP officer on July 1, 2014.

The officers who found her today took her from the freeway to a safer location and, after further evaluation, she was taken to County-USC Medical Center for a psychiatric evaluation and treatment, according to a CHP statement.

Pinnock, who was 51 at the time of the beating, sued the CHP in federal court and received a $1.5 million settlement that included the resignation of Officer Daniel Andrew.

Her lawyer, Caree Harper, who was criticized by a federal judge for taking a 42 percent share of the settlement, said Pinnock suffers from bipolar disorder and didn’t take her medication for months before the run-in with Andrew, who had been on the job for two years.

At the time the settlement was announced, CHP Commissioner Joe Farrow said a large portion of the funds would be placed into a special-needs trust for Pinnock “to provide a mechanism for her long-term care.”

Before the beating video was made public, the CHP said Pinnock was walking barefoot along the freeway shoulder and occasionally in traffic lanes and when she did not respond to orders to stop, Andrew got out of his patrol vehicle and confronted her, at which time she became combative.

Pinnock’s beating was recorded with a cell phone camera by music producer David Diaz, who was driving along the freeway near La Brea Avenue and witnessed the altercation.

Meanwhile, a CHP captain sued the agency and Farrow in Los Angeles Superior Court, claiming he was punished for resisting pressure from his employer to find that Andrew acted improperly during Pinnock’s arrest.

Capt. Gregory Hammond alleged the investigation was taken from him when he resisted management’s orders and that he became the target of an administrative interrogation.

He claimed he was ordered to attend a meeting shortly after the beating and told by CHP chiefs that there was “tremendous pressure” coming from Washington, D.C., and Gov. Jerry Brown’s office “to get this matter resolved favorably.”

The captain claimed he was told, “We want you with us on this and we hope you know what you have to do,” and that he responded by telling his bosses he could not support firing Andrew unless the facts warranted his dismissal.

Hammond, who claimed he was denied promotions and suffered damage to his reputation, went on stress leave in August 2014 and returned to duty in November, according to his lawsuit.