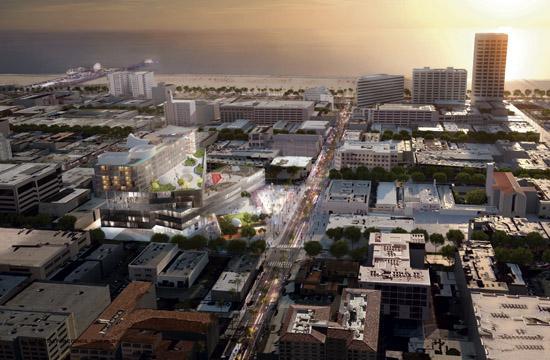 The 4th/5th & Arizona project public process could be a drama in the “Kabuki Theater of Santa Monica.” A drama complete with Kabuki set roles of villagers, warlords, samurai, nobles, and servants and a plot of strategy and gamesmanship.

Unlike the world of Kabuki Japan we are a democracy. Instead of the Samurai with his sword of justice saving the day we have the tools of democracy. The democratic process, in all its fullness will, I offer, be the way to the best possible decision. The kind of decision that, like Santa Monica City Hall or Palisades Park made it possible for future generations to look back at the careful thoughtfulness of past Santa Monicans and be grateful.

Our cast of characters includes: the Council, City Manager, and City Staff; the developer and his team; the Neighborhood Groups, Residocracy – a City wide group formed to oppose the ultimately unsuccessful Hines development, the Union hotel workers, the political organization SMRR, the low income housing developers Community Corps, and the many Santa Monicans who take a keen interest in development in the City.

On Oct. 20, 2015 the City Council held a special ‘float up’ meeting to hear the project, to decide whether or not to go ahead and, if going ahead, to give direction to the developer and City staff.

The 4th/5th & Arizona project is on City owned land so the City has both regulatory and proprietary responsibilities. The developer proposes to build a 420,000 square foot building comprised of a cultural component, public open space, office space, a boutique hotel and affordable housing. The southern edge is 12 stories with a maximum height of 148 feet. The building steps down, getting lower the nearer it gets to Arizona. The building design has a series of rooftop open spaces and the ground floor has 38,000 square feet of public open space. This project is under a Development Agreement.

John Warfel, the development team leader, said he knows there is support for the design, for open space, hotel and housing in the project but opposition to the proposed height and massing. He asked for direction from the Council.

As is the script at public hearings, next up were the more than 75 speakers for almost three hours of public testimony.

Often design is the center of public opposition. This project has some people who are wary of the design, but many more who think it inspirational and whose wariness is focused on height and scale.

Support for the project as proposed at 148’ in height and 420,000 square feet of floor space came from long time Santa Monica activists who spoke about the good jobs that would be created and the affordable housing that was part of the project. Both housing and jobs were part of the original direction to the developer from the City.

Support for project as proposed came from members of the UNITE HERE Local 11, the hotel workers union. Melanie Lutheran, speaking for the Union said more than 1,000 union members live and/or work in Santa Monica and support the project at 148’. Clergy and Laity United joined in speaking to the need for good, well-paying jobs

Opposition speakers included long time Santa Monica activists speaking against planning through Development Agreements and asking the Council to look at requiring the building to comply with the 84-foot height limit.

Zina Josephs, speaking for the Friends of Sunset Park stated her organizations support for a park on the site and added, “We also believe the development agreement should be put on hold until the completion of the Downtown Specific Plan because: (1) this is resident-owned land that should be used for resident needs, (2) we want a park with parking underneath, and (3) the proposed hotel/office project is deeply flawed.”

At the close of the public hearing the Council deliberated.

Mayor Kevin McKeown called the design “brilliant” but said his concerns were height and mass. He said, “The first thing you do when there’s too big a hole is to put down the shovel.”

Councilmember Ted Winterer said the design was “place-making” but too big for the site and asked the Council to look at how to achieve balance.

Councilmember Terry O’Day said, “If this is a box we’re in it’s a box we’ve built. If what we’re struggling with is the size of the envelope then let’s tell the development team and staff that’s what we want.”

At the end of the discussion it was unanimously agreed that the Council rejected the project as presented and wanted to move forward with a smaller project to be studied in the EIR (Environmental Impact Report).

The EIR to be prepared would:

• Study a project at six stories – per the recommendation of Councilmember Sue Himmelrich.

• Study the site for a park with underground parking.

• Analyze the no project alternative.

Staff estimates EIR preparation will take 12 to 18 months and expects the Downtown Specific Plan to be completed first.

The meeting was adjourned at 1:30 am.

Let’s consider the time needed to prepare the EIR as the intermission in the play. More importantly this is the time to carefully and thoughtfully use the tools of democracy to ‘write’ the next act.

A fundamental rule of democracy is that people work together to make decisions. It’s time for our cast of characters to engage in what City Manager Rick Cole calls “robust outreach.”

Not as easy a task as it might sound. But one that is necessary for a good decision to be made given the strength of divergent opinions in the City, as listed below.

Armen Melkonians, the founder of Residocracy said, “The Residocracy Board feels the site would better serve the City if it were a park.

“Tongva Park,” said Melkonians, “is more a piece of art than it is a place for people to go to relax or to play. And it feels kind of dangerous – from Ocean Avenue it feels as if you’re entering a cave and can’t tell what’s there or where it’s going. We want this park to be a place to rest and relax for both downtown workers and adjacent residents. A place of grass and trees and shade and benches.

“No matter what the Council does, a park belongs there, and in the end it will be a park.”

John Warfel, leading the development team, said, “I know we have a lot of work to do with the neighborhood groups. I believe that once people understand the project at least some will see the project will be a community asset.

He cited the Zimmer Museum (www.zimmermuseum.org), the 48 units of affordable housing, the extensive public open space on the ground floor, the open space within the building structure, the commitment to extensive and on-going programming of the public space, the opportunities for good jobs, the public parking and the design.

Sho Shigematsu, the lead designer for the 4th/5th & Arizona project is a partner at OMA, the architecture firm of star architect Rem Koolhaas. Shigematsu responded to the concern that changing the scale of the project would harm the design. “Because this building’s concept was driven by the programmatic need, increasing or decreasing these elements will not dilute the design. We are confident our concept will rise to the challenge of addressing the civic and commercial needs of the city.”

Francis Engler of the hotel workers union, UNITE HERE Local 11, is a supporter of the project at the 148’ height. He has expressed a deeper concern over what he sees as the racism in the dialogue, saying, “When we hear someone say that hotel workers are not residents of Santa Monica we ask, “What makes you jump to the conclusion that hotel workers are not residents of Santa Monica? The fact they are Latino? The fact they speak Spanish? The fact they are wearing the uniform of a housekeeper? Which prejudice tells you they don’t belong? We have never, ever heard an opponent of this project ask a white person if they are a resident of the City. They only ask this question of Latino hotel workers.”

SMRR (Santa Monicans for Renters’ Rights) Co-Chair Patricia Hoffman said, “SMRR has not yet taken an official position on the project. But many members think it’s too big, that it’s massive and many members love it and think it’s exciting and good for the city.

“It’s normal for us to have differing opinions and disagreements but I expect SMRR will take an official position when the EIR comes forward for review. Then we will actually know something.”

I say I agree with Cole when he says, “the greatest safeguard for long term economic security is not the upfront payoffs but how the new building will contribute to a vibrant and sustainable future for the city.”

I say I agree the proposed project is too big, out of scale, for the site and don’t, can’t know yet, if the reductions directed by the Council are sufficient.

I say, at the right scale, this is a brilliant piece of architecture for Santa Monica. The design concept of the carpenter’s rule opens in a way that creates many opportunities for being outdoors in a city whose character is defined by the outdoor life. The programming being offered is key to the building’s success as a public building.

Most of all, I say that this time, the time before the EIR is ready for its first public scoping meeting, is the time for an open and thoughtful dialogue. It can only lead to a better decision.