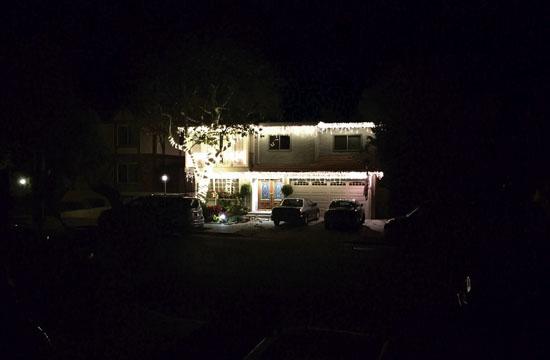 Santa Monica resident Kristine Hart loves Christmas, but has been at odds with her neighbors since Oct. 15, the day the home across the residential street near Santa Monica College lit up their annual Christmas display.

Hart describes it as “light pollution,” adding that in previous years the lights have remained on nightly through February or March while the spotlights and some of the lower lighting remain on all year.

“Some people see it only as a well lit house for security, but if one compares my pictures they will see the other houses in the neighborhood have security lights and they are no where near as brightly lit,” Hart said.

Hart said the excessive lighting around the holidays has been going on for a few years.

“The first year the Christmas lights went up around September,” Hart said. “I asked my neighbor to please turn them off at midnight, but she refused to do so. Instead, she added to those lights, including two tiers of icicle lights along her first and second floors. She then added lights to two small trees on either side of her front door.

She also has a motion sensor double spot light that goes on when anyone walks by.”

Since the home is near SMC, the sensor lights go off regularly, Hart said.

Hart said after the end of the first year of holiday lights, the female neighbor fell while taking down her Christmas tree and broke her hip.

“She apologized to me after that and the following Christmas told me she would only put up limited lights,” Hart said. “I guess she felt guilty, but she only put up one less tier of lights. I didn’t complain since I was trying to be an understanding neighbor and deal with it. After all, she was trying to be a better neighbor.”

However, last month on Oct. 15, Hart said the neighbor “went completely nuts with her lights.”

“She always has the tree strand of tube lights on but she doubled up on the lights on the big tree and went even higher up into the trees with lights,” Hart said. “She put up more icicle lights than ever, lighted snowflakes off her balcony, and there even seems to be lighting around her front door as well.”

Hart said she asked the neighbor if the lights could be turned off at midnight. Hart said the woman told her she would if Hart bought her a $300 timer.

“She also said ‘wear a face mask if it bothers you,’” she said. “It’s just ridiculous. Firstly, these lights were kept on all night. After asking her and pleading with her to please turn them off at midnight, to no avail, I spoke to Code Enforcement and they asked them to turn them off at two in the morning. So now the big lights go off at 2 am. I see very little difference with playing loud music until 2 am. The huge tree in front stays on all night. Also that same tree is lit all year all night. The tree is probably lit up to 30 feet.”

Last week Hart said she saw her neighbor’s husband sitting in the garage and tried to talk with him about the lights.

“I went over as friendly as possible,” she said. “I asked him if he realized the higher risk for diabetes and cancer for people who sleep with artificial lighting. I said ‘could you consider turning them off at midnight?’ He said he already got a notice from the City of Santa Monica and the law says he can leave them on until 2 am. ‘So they go off at 2 am, goodnight’ he said as he waved me off with a smirk.”

Hart said there are several states that now have light pollution laws.

“It would be nice if Santa Monica did as well,” she said. “Here we are on the edge of the Pacific and we still miss out on so many stars due to light pollution. Some say it is her building and she has the freedom to light it any way she wants. This reminds me of the smokers who felt they had the right to light up where ever they chose.”

Hart said she didn’t want to be seen as creating “a war on Christmas.”

“I celebrate Christmas,” she said. “Heck, I was named Kristine because I was born close to Christmas.”

Attempts to talk to the owner of the house in question were unsuccessful.