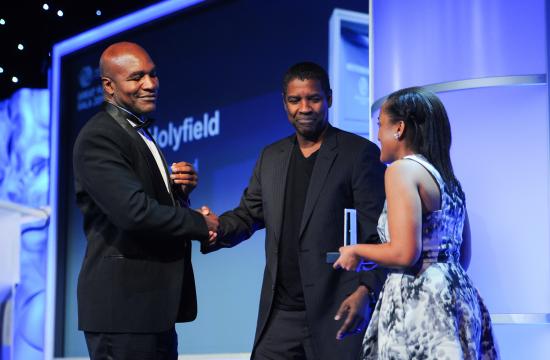 Andrew R. Tennenbaum, President of Flashpoint Entertainment and a member of BGCA’s Board of Governors and Tim Wennes, West Coast President of Union Bank and a BGCA National Trustee co-chaired.

The more than 450 guests were ushered into the event to the musical dance routine of Molodi and Boys & Girls Clubs of Santa Monica’s Mar Vista Gardens Steppers, kicking up their heels before the evening’s host, Boys & Girls Club alum, actor, comedian and writer JB Smoove took to the stage, recounting his own experiences with the organization as a former member of the Mount Vernon, New York Club.

Jim Clark, president and CEO of BGCA stressed the social and economic importance of the organization, noting that today, “There are 15 million kids and teens living in poverty and nearly 11 million leave school every day with no place to go. The result,” he continued, “20 percent of America’s youth fail to graduate high school and for minority and low-income youth, it’s nearly 50 percent. That’s where this organization comes in, when nearly four million kids enter Club doors at 4,200 locations around the country and the world, their lives are changed forever.”

According to Clark, 54 percent of alumni credit Boys & Girls Clubs with saving their lives.

Youth of the Year is BGCA’s premier recognition program for Club teens and the National Youth of the Year title is the highest honor a Club member can receive, representing the voice of four million Club youth.

Fostering the ability to dream big, other notable Boys & Girls Club alumni, including Olympian Jackie Joyner-Kersee, actor Martin Sensmeier and former NBA player and current FOX Sports Big Ten anchor Jim Jackson spoke about how the Clubs had encouraged them to dream and how those dreams were eventually fulfilled. They were joined by current Club members who identified their own dreams and the confidence to believe in them coming true.

BGCA National Spokesperson Denzel Washington presented the 2015 Champion of Youth Award to Evander Holyfield, the only five-time World Heavyweight Champion. Growing up in Atlanta, Holyfield took boxing lessons as a child at a local Boys & Girls Club, participating in Golden Gloves competitions in the early 1980s. In 1984, he won a National Golden Gloves Championship and went on to receive a Bronze Medal aspart of the U.S. Olympic team.

Following the Olympics, Holyfield turned professional, winning the World Boxing Association (WBA) World Cruiserweight title in 1986. Training to become big enough and strong enough to compete as a heavyweight fighter, he first captured the Heavyweight Champion of the World title in 1990, defeating James “Buster” Douglas. Following his defeat to Riddick Bowe in 1992, he recaptured the title when he defeated Rowe in a 1993 rematch.

After overcoming health challenges,Holyfield returned to the ring, defeating Mike Tyson in their first encounter in 1996.

Holyfield credits Boys & Girls Clubs for turning him into a man. He has donated his time and resources to Boys & Girls Clubs and is currently helping recruit members to the new Boys & Girls Clubs Alumni & Friends Club, an effort that aims to engage the more than 16 million estimated Club alumni. As another away to give back to the community, he created the Holyfield Foundation. Holyfield strives to strengthen the lives of youth and their families by establishing and funding programs dedicated to their athletic, academic and spiritual development.

A highlight of the event was a live auction featuring the training experience of a lifetime – a one-hour boxing workout with the champ himself, Evander Holyfield. For the less adventuresome, a seven-night stay at Turtle Island in Fiji or a visit for two to the FOX NFL Pregame Show also created a bidding frenzy.