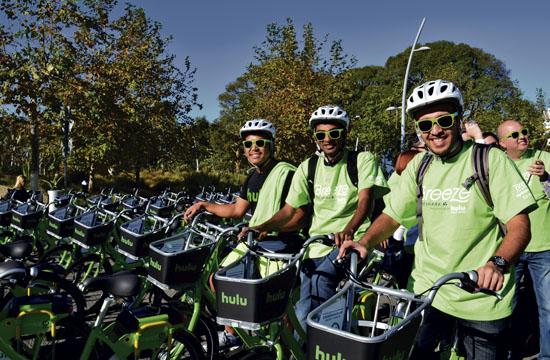 The public and private sector came together like a breeze Thursday morning at the official launch of Santa Monica’s, and the region’s, first bike share program of its kind.

Hundreds of green-wearing Hulugans and city officials burst onto Main Street in front of City Hall to signify the release of all 500 eight-speed Breeze bicycles at 75 stations citywide. Several stations in Venice are expected to follow soon thereafter.

“Except that these aren’t just toys – these are practical transportation. These will help us get around in our city. And how often do you get to reduce traffic, avoid parking hassles, fight climate change, improve public health, and have fun at the same time? And that’s what we’re going to do with Breeze Bike Share in Santa Monica,” he said.

During those nine years, Bloom recalled the frustrations and eagerness of watching other cities follow suit.

“But the silver lining in that cloud is that Santa Monica has the benefit of time, and now, two or three generations of technology and improvements in these systems,” he said.

More than $2 million in funds from Air Quality Management District, CalTrans, and Metro also made the service possible.

The new bike share program goes with a “smart-bike” – manufactured by Social Bicycles (SoBi) – complete with a solar and rider powered keypad, eight-speed internally geared hubs, and rust and corrosion resistant aluminum frame with stainless steel components. Each bike is capable of accepting payments and releasing the bike-lock independently via a mobile, web, and administrative software that interacts with the smart-bike hardware.

Stephen said the bike share program beckons to anyone in the City, from residents to employees to visitors, who rode for free Thursday.

And with Expo Light Rail expected to begin shuttling passengers to Santa Monica in 2016, bike share will help move people to and from the stations without their cars.

“This will be that last mile connection we need to get from the train station to home,” Mayor McKeown said.

Until Dec. 31, a yearlong membership, which includes one hour of riding time per day, will cost $99. Santa Monica also offers monthly memberships for $20, a student pass for $47 per term and a pay-as-you-go-option, which costs $1 for every 10 minutes.

Hulu brings their local sponsorship – headquartered at 2500 Broadway – with international recognition. Hulu’s logo, which happens to use the same green color as the Breeze bicycles, is displayed on the bicycles’ baskets and skirt guards.

With more than 500 employees in the city, the premium streaming television service seemed to bring out all of them to ride during the inaugural bike ride and green ribbon cutting.

“Along with leadership has to go partnership,” Mayor McKeown said of the regional partnerships Santa Monica has brokered. “Beverly Hills, West Hollywood, as well as UCLA and Long Beach, are adopting the same bikes that we have for this bike share program. Which means it will be an integrated program around the region. And we’re hoping now that other cities now in the area, and the county, and Metro will join us in having a true, regional bike share system.

“This is going to make a difference in people’s lives.”

To learn more about Breeze Bike Share or how to rent a bike visit breezebikeshare.com.