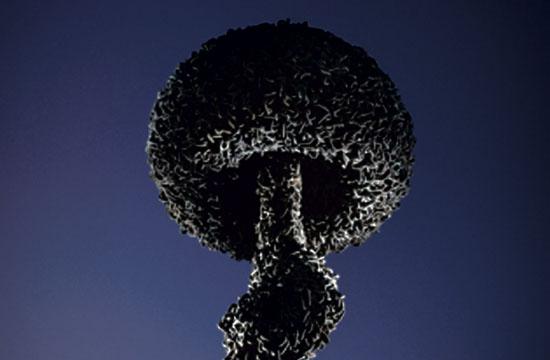 For supporters of the Chain Reaction sculpture near the Santa Monica Civic Auditorium, Tuesday was a major victory following the City Council’s unanimous vote to grant funds up to $275,000 to restore the peace sculpture.

The final supportive action part of Council’s Consent Calendar followed a four-year ‘Save Chain Reaction’ broad-based grassroots campaign, according to peace activist Jerry Rubin who helped lead the efforts to save the sculpture.

Rubin said supporters included artists, activists, educators, students, religious leaders and former Santa Monica Mayors, as well as members of the family of Paul Conrad, the late three-time Pulitzer Prize-winning political cartoonist who designed and created Chain Reaction and gifted it to the City as a public art peace message.

The 26-foot-tall mushroom cloud public art peace sculpture has been standing in its current location since 1991.

In recent years it had been threatened with removal due to safety concerns.

On March 20, 2012, Council approved the Arts Commission’s recommendation to remove Chain Reaction, and agreed to delay such action until Nov. 15, 2012, to allow the family and members of the community time to fundraise for the necessary repairs.

In July and November 2012, the sculpture and an associated parcel of land were designated as a City landmark by the Landmarks Commission.

On Feb. 25, 2014, Council accepted funds in the amount of $101,290 from community contributions to support the restoration of Chain Reaction, authorized $75,000 to complete final testing and structural evaluation, and authorized the development of a restoration plan for the sculpture.

On Aug. 10, 2015 the restoration plan was presented to the Landmarks Commission and was approved for Certificate of Appropriateness.

The City will now issue a Request for Bids to execute the restoration plan.

Both spoke in support of the restoration funding as well as funding for a ‘peace garden’ buffer that would encircle the sculpture and for lighting and appropriate informational and landmark designation signage.