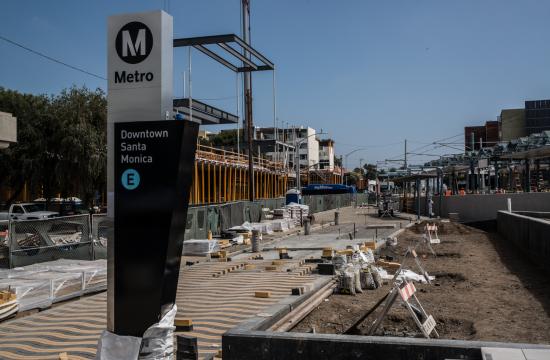 Phase 2 of the Expo Line Extension project will add seven new stations between Culver City and Santa Monica – the final three of those stations are in Santa Monica.

“Metro has announced that the Gold Line extension, which is 11 stations in the East San Gabriel Valley, will be opening on March 5,” Cole said. “Since both of these lines are under active testing my assumption is that we will probably be 30-60 days behind the Gold Line; they are not going to move them so close together as to strain their staff. Since we are both in the active testing stage, I think we will be seeing revenue service as early as the beginning of April and probably no later than mid-May. When you think that the Metro Gold Line is less than four months away, and we are probably four to six months away, it’s really important we begin to think about all that goes into getting ready for what will be a historic change in how we get around in our city and how we connect with the rest of the region.”

Cole said the City of Santa Monica has set up seven staff committees from different departments that are affected like public safety.

“We are also working with Metro and the Expo Light Rail Construction Authority on the maintenance yard,” he said. “Of course, we’re moving forward on Buffer Park.”

Cole said the City is also working to ensure that the historic return of rail transit to Santa Monica is appropriately marked with a launch that makes “maximum opportunity to educate the public about both the dangers and opportunities that come with rail running again through the city.”

He said the hope is that people use the train as much as possible, adding the new line cost tax payers in the region about $1.5 billion.

“We’re also very concerned with traffic and circulation and how having a train bisect our city, which is already bisected by a freeway, will affect our already traffic-challenged community,” Cole said. “We’re also going to be working on the first and last mile connection. Riding the train will be great if you can get to the train and get back again. There are a lot of options including taxis to get to the Expo Line.”

Cole said the City is also thinking very much about maintenance.

“This is a 50 to 100 year investment and maintaining the public realm in and around the right of way is important,” he said. “We’re also thinking about customer service and our service to commuters and riders.”

“We’re already engaged in very active staff training, primarily with Metro and the Sheriff’s Department who provide security for Metro on contract, our own Office of Emergency Management, our Fire Department and Police Department who are working with the California Highway Patrol, Caltrans, Homeland Security, and a lot of other agencies concerned about every aspect of safety.”

Cole said LASD and SMPD will have the most day-to-day contact.

“Frankly, there are literally hundreds of violations every day of people walking on the tracks, driving on the tracks instead of on the road, of people making illegal left turns on Colorado,” he said. “We have a lot of education and some enforcement to do. Obviously our emphasis is going to be on education. In order to protect people’s lives when the trains begin running we are going to have to be very vigil to enforce the law to protect people’s safety both on the trains and on the street.”

Cole said the City is conducting a lot of outreach on education, particularly in public schools, community groups, business groups, senior citizens, and Downtown Santa Monica ambassadors. “We’re doing a lot of planning because there are all sorts of unanticipated contingencies,” Cole said. “We all know former Defense Secretary Donald Rumsfeld’s description that there are known knowns. We know there will be accidents; there are known unknowns that as we know there is potential for more significant kind of problems; and then there are even potentially unknown unknowns; we could be the first to experience the kind of things that can happen when trains meet an urban environment for the first time in 50 years.”

Cole said the City was planning through taking a look at experience, “not just the other 82 miles of rail that’s already in operation throughout Los Angeles County, but also other cities that have light rail lines in urban settings.”

“We’re working on communication infrastructure: things like security cameras, all the sensors that are involved in a major investment like this, and we’re also concerned about our homeless,” he said. “This is an ongoing challenge in Santa Monica and Los Angeles County. We all know (homelessness) has reached crisis levels in downtown Los Angeles and as the stress on Skid Row in downtown Los Angeles causes more and more folks to migrate out of the center city, they are fanning out to places that have not experienced them. We want to be ready to deal with those challenges to connect people to services to get them to where they can get help.”

On the topic of the Expo Maintenance Yard, Cole said its construction in Santa Monica wasn’t without some controversy.

“As a result of that controversy, an adjacent Buffer Park is being developed as a mitigation to a neighborhood that has had a lot of stresses and strains over the years,” Cole said. “This is a wonderful new small park that is going to very well landscaped and be a real amenity in that neighborhood. It was planned in consultation with the neighborhood. The Expo Maintenance Yard will be completed by the end of this calendar year, and we will begin construction of Buffer Park as soon as that’s done bright and early in 2016. Within nine months people will be able to use the new recreational amenity in their neighborhood.”

Cole said he plans to talk more on the Expo Line and its impact on the City at future Council meetings.