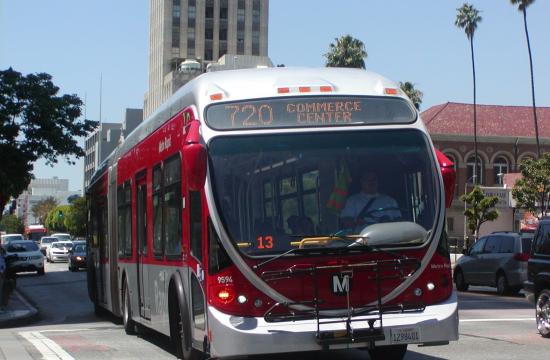 The last segment of peak hour bus lanes on Wilshire Boulevard aimed at reducing bus commuting time on one of L.A. County’s busiest corridorswill open at 7 a.m. on Monday, Nov. 16.

The opening of the peak hour bus lanes between Federal Avenue and Centinela Avenue in West L.A. marks the completion of the Wilshire Bus Rapid Transit (BRT) project, which created 7.7 miles of peak hour bus lanes and 9.9 miles of miles of street, signal and signage improvements along the active corridor.

“This dedicated bus lane will make a huge difference for the thousands of commuters who rely on public transit to travel along Wilshire Boulevard every day,” said L.A. County Supervisor and Metro Board Chair Mark Ridley-Thomas.  “It’s an affirmation of our ongoing commitment to bring residents of L.A. County faster and ever more reliable mobility choices.”

In April, Metro celebrated the grand opening of five miles of peak hour bus lanes along Wilshire Blvd. as part of the same project. In their entirety, the bus lanes span from South Park View Street to San Vicente Boulevard, the western border of Beverly Hills to Comstock Avenue, Selby Avenue to Veteran Avenue, and Bonsall Avenue to Centinela Avenue. During the weekday peak hours of 7 – 9 a.m. and 4 – 7 p.m., only transit buses are allowed in the bus lanes.

The Wilshire BRT project is a $31.5 million transportation improvement project spanning from Valencia Street near MacArthur Park to Centinela Avenue in West L.A. that aims to improve traffic flow and potentially save bus riders as much as 15 minutes in travel time along the heavily used Wilshire corridor.

“This project is an efficient and affordable solution that will provide tangible benefits for our riders,” said Metro CEO Phil Washington. “It’s a great example of how we can make smart, relatively inexpensive investments that use improvements to our existing infrastructure to save commuters valuable time and provide an appealing alternative to driving.”

Metro operates buses every two minutes on Wilshire Boulevard west of downtown during peak hours. There are  approximately 45,000 daily boardings with 50 percent of them occurring at rush hour. The average peak hour bus commutes from Valencia Street to Centinela Avenue are 62 minutes in the morning and 75 minutes in the afternoon.

During peak hours, drivers of passenger vehicles and trucks are subject to a citation if driving in the bus only lanes. Cars and trucks turning right during peak hours may use the curbside lane as well as bicyclists. There will be a two-week grace period along the newest segments in West L.A. to give drivers time to adjust to the new lanes.

The project was funded through a federal Very Small Starts (VSS) grant awarded to Metro in August 2011. The grant of $23.3 million was paired with an $8.2 million local match. The project is expected to be completed within budget.

While Metro secured funding and environmental approval, the City of Los Angeles was lead on construction of the project of the segments within their jurisdiction. L.A. County led construction on a segment near the V.A. West Los Angeles Medical Center.

Prior to the project, the only bus lanes in L.A. were along Figueroa Street from Adams Avenue to 7th Street. Metro is currently investigating additional corridors that may benefit from the implementation of BRT service and related improvements.