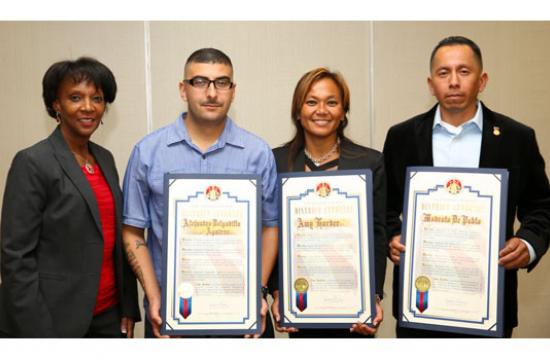 A man who tried to thwart a deadly knife attack on his co-worker at a Santa Monica grocery store was among three people honored today as courageous citizens by Los Angeles County’s top prosecutor.

Modesto De Pablo, 39, was lauded by District Attorney Jackie Lacey.for choosing to physically intervene, then jumping on the back of his co-worker’s estranged husband during the Aug. 21, 2011, attack.

The assailant threw De Pablo off his back, turned around and swung the knife at him, coming about an inch from his face.

De Pablo’s co-worker died of her injuries the next day. He testified against the woman’s estranged husband, helping prosecutors to secure a conviction against him.

Also honored at a luncheon hosted by the Rotary Club of Westchester were:

— Amy Harder, 38, of Sun Valley, who called police to report the July 2011 killings of her then-boyfriend’s two roommates. She worked with police to find her ex-boyfriend, who was arrested after a shootout with police; and

— Alejandro Delgadillo Aguirre, 23, of Los Angeles, who called 911 to report an attack in June on a 70-year-old man who was leaving a gas station in the city of Commerce. Aguirre “bear-hugged” the assailant to try to stop the attack and was bitten in the process. He then  pulled the attacker away from the man and held him with the assistance of several other bystanders until sheriff’s deputies arrived.

“Our community grows stronger every time one neighbor lends a hand to help another in distress,” Lacey said. “These heroes played an important role in the prosecution of three violent criminals. Los Angeles County is a safer place to live because of them.”