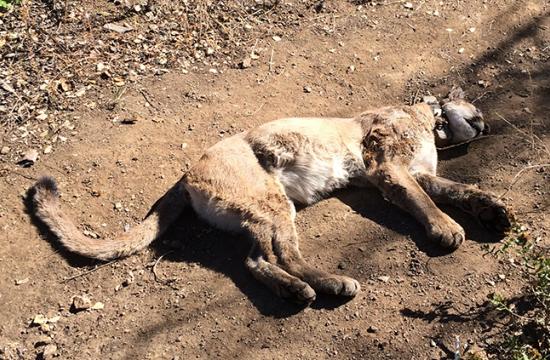 A young mountain lion that was recently found dead near Point Mugu ingested several rat poisons, highlighting the danger the poisons pose to wildlife in the Santa Monica Mountains, according to parks officials.

The female lion, one of about a dozen being tracked by National Park Service officials in the Santa Monica Mountains, was known as P-34 and was found dead Sept. 30 by a runner in Point Mugu State Park.

According to park officials, the lion was exposed to multiple compounds of anticoagulant rodenticide.

“This is the latest indication that wildlife continues to be exposed to these rodent poisons,” said Seth Riley, a wildlife ecologist for Santa Monica Mountains National Recreation Area. “We hope that P-34’s death will continue to raise awareness about how anticoagulant rodenticides work their way up the food chain, often with deadly effects.”

It’s unclear exactly how P-34 ingested the poisons, but officials said a lion can often ingest it by eating animals that consumed the bait, such as a ground squirrel.

The lion’s death was the third being tracked by parks officials to die from rodenticide poisoning.

P-34 made headlines last year when it was photographed wandering through a Newbury Park neighborhood.