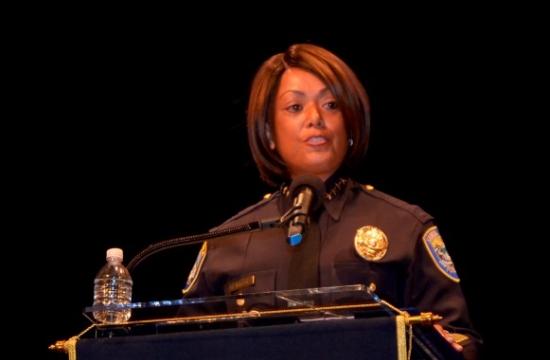 Santa Monica’s police chief, a black woman, is defending her officers and a 911 caller after a black executive said she was detained as a burglary suspect in her own home because of her race.

Fay Wells wrote in an article published by the Washington Post that she locked herself out of her apartment late one night in September and called a locksmith to get back inside. A neighbor Wells described as white called 911 to report a burglary in progress, triggering a response by at least 16 officers who detained Wells at gunpoint, according to her article.

Wells identified herself in the Post as a vice president of strategy for an unnamed California company. The Santa Monica Police Department corroborated Wells’ basic account in a statement issued after her piece was posted Wednesday, and a spokesman said the department was investigating its officers’ response, the Los Angeles Times reported.

Santa Monica police Chief Jacqueline A. Seabrooks says she could see all sides.

“As a black woman born and raised in South-Central Los Angeles, I empathize with Ms. Fay Wells and how the experience made her feel,” Seabrooks said in a statement. “On the other hand, as an experienced law enforcement executive, I understand the Police Department’s response and the need for that response.”

Seabrooks said she could not fault the neighbor for reporting what he believed was a burglary.

Wells wrote that when the police arrived, she was inside her apartment.

“Peering through my blinds, I saw a gun,” she wrote. “A man stood at the bottom of the stairs, pointing it at me. I stepped back and heard: ‘Come outside with your hands up.’ I thought: This man has a gun and will kill me if I don’t come outside.”

After going down the stairs, “I told the officers I didn’t want them in my apartment,” she wrote. “I said they had no right to be there. They entered anyway. One pulled me, hands behind my back, out to the street. The neighbors were watching.”

Wells wrote that the police overreacted because she was black.

Below is the full statement from Seabrooks: