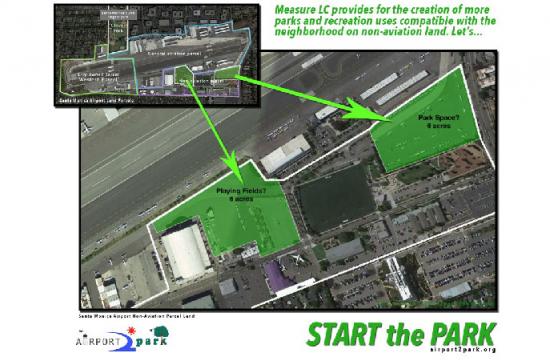 The Santa Monica Airport2Park Foundation, a 501(c)(3) non-profit organization, will hold a fundraiser barbecue this Sunday, Nov. 15, to commemorate the first anniversary of the passage of Measure LC by voters of Santa Monica.

The barbecue will take place Sunday, Nov. 15, from 1 pm to 4 p.m. at a private residence in the Ocean Park neighborhood. Tickets are $35. For more information about this event and to obtain tickets, visit the airport2park webpage for this event: http://airport2park.org/lets-celebrate.

Donations to the foundation will be used to fund continued outreach to the community. In 2016 the City of Santa Monica will be embarking on a process to plan the expansion of Airport Park onto 12 acres of land (see attached graphic) that are being removed from aviation use, and the foundation will need resources to engage the community in this process.

Since the passage of Measure LC in November 2014, the foundation has been very active in promoting conversion of the airport into parkland.

The foundation’s activities have included making presentations to neighborhood groups, promoting the Airport2Park movement in events around Santa Monica such as the Santa Monica Festival and the Main Street Fourth of July Parade, meeting with the City’s Community and Cultural Services staff to give input into the process for designing the Airport Park expansion, and publicizing the Airport2Park movement with events like the “Start the Park” celebration on July 1, that marked the start of the Airport Park expansion.