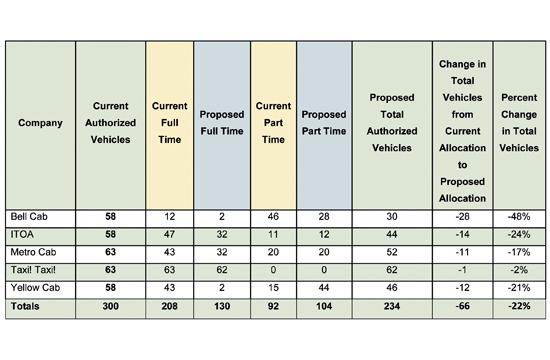 With the rise of ridesharing companies like Uber and Lyft, it’s been a rough couple of years for the five taxi companies who are permitted to operate in Santa Monica under strict franchise agreements.

According to data from the five companies – Bell Cab, Independent Taxicab Owners Association, Metro Cab, Taxi! Taxi!, and Yellow Cab – they have experienced an average 27 percent reduction in trips in 2014 when compared to 2013.

With the current franchise agreements between the five companies and the City of Santa Monica expiring next month on Dec. 31, the agenda item heads to council this Tuesday night.

The most contentious issue: City staff is recommending in their report to the City Council that the current number of total vehicles authorized to operate be reduced from a total of 300 to 182 full time equivalent taxi cabs.

Marco Soto, Yellow Cab vice president of Marketing and Public Affairs, said taxi cab companies have been punished enough from ridesharing companies taking away their business, and a move to reduce each taxi cab company’s fleet would be devastating.

He said it’s simply not fair that companies like Uber and Lyft are unregulated by the City with no caps on how many of their vehicles are on the road at any given time.

“For the taxi cab companies to operate we have followed all the City rules, complied with the background checks, paid business license fees, and paid City franchise fees,” Soto said. “With all the rules set by the city and their policy objectives like having 80 percent of taxi cabs being a hybrid or CNG vehicles, we still have these ridesharing companies we’re competing with and they’re beating us because they are beating us on price and beating us on scale. By reducing our fleet we can’t beat them on scale and our hands have been tied on the pricing issue because the taxi meter rates are approved by the City of Santa Monica. We can’t offer passengers a discount and we can’t offer lower rates without the City Council approving lower rates for the taxi cab companies. We want to be able to experiment with new lower rates that the consumers of Santa Monica will benefit from, but we want to be able to do it legally by having it in our new franchise agreement.”

Under City staff’s recommendation, Soto said Yellow Cab’s authorized number of vehicles would be reduced from 58 to 46.

“There are a lot of people whose livelihood depends on taxi cabs, and if you go down to 182 taxi cabs across the five companies, that’s a minimum 128 families that will be out of income because that’s 128 taxi cabs off the road; some cabs have one driver while some cabs have multiple drivers.”

“In the case of Yellow Cab, we’re a co-op, which means each cab on the road is owned by an individual who owns a share of stock in the company,” he said. “They are the driver-owner of that vehicle or they may be driving the cab part-time and having someone else drive it at night for example. Folks are business owners and/or independent contractors.”

Soto hopes City Council will decide to help taxi cab drivers compete in this new market, not leave them out of jobs.

“We are asking them to relax the regulations that don’t affect public safety so we can compete,” he said. “We still want background checks and drug testing in place, but we need them to be able to operate more freely to survive.”

In their letter dated Sept. 23, 2015, the coalition states “[W]here our business is drastically down due to the encroachment of unregulated businesses who pay no fees to the City, the value of our franchises have dropped considerably.”

Because of the incremental approach to the changes that staff is proposing, City staff is not recommending a waiver to the business license fee of $250 per vehicle at this time, according to the City staff report, but a waiver could be considered in a future modification to the program with any franchise fee changes.

Tuesday’s City staff report explains the recommendation of reducing the number of vehicles authorized to operate in the city.