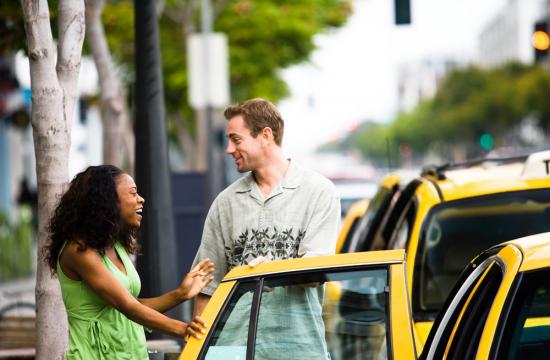 In the lead up to the Santa Monica City Council meeting on Tuesday night, the five taxi cab companies currently operating under strict franchise agreements with the City of Santa Monica faced a very uncertain future.

City staff was recommending to the seven-member panel that the total number of authorized taxi cabs across the five companies be reduced from the present 300 to 182 full-time equivalent taxi cabs.

In a vote of support toward the taxi cab companies – Bell Cab, Independent Taxicab Owners Association, Metro Cab, Taxi! Taxi!, and Yellow Cab – the Council rejected the City staff recommendation and voted to allow the companies be able to keep their current fleet sizes under a new two-year agreement.

Marco Soto, Yellow Cab vice president of Marketing and Public Affairs, said he was thrilled their fleet would not be cut from 58 to the proposed 46.

He was also excited the city granted price flexibility regarding the ability to reduce meters rates under the extended franchise agreement.

He said these two factors would allow the local companies to finally compete with Uber and Lyft.

“Residents of Santa Monica will benefit from it and so will we,” Soto said. “The residents will benefit because now they will have more competitively priced taxi rates because there will be a cap set on what the maximum rate is. Now they will be able to receive discounts on taxi cab fares which is something we need to do in order to create more trip density to get people back in taxi cabs. Honestly, we have certain cost elements in our business that effect our pricing where we can’t lower it to what Uber and Lyft are offering, but we can now be fairly competitive. That’s because we have to pay for full time insurance, we have franchise fees, and we have different costs than Uber and Lyft companies because they are regulated by the PUC, but even through that they are still very unregulated.”

Another bonus for the taxi cab companies: the ability to deliver goods under the new franchise agreement.

“A lot of taxi cab companies (in other cities) have contracts with medical facilities where they transport equipment or specimens for hospitals from one location to another,” Soto said. “There was a proposal by City staff to prohibit us from doing that, but the Council saw that the taxi cab industry has to have different sources of business to compete, and they decided ‘let’s not prohibit this from happening.’”

Santa Monica City Manager Rick Cole echoed a sentiment that the council had noted during Tuesday’s meeting, saying the regulation of the taxi cab industry was “a moving target.”

“There is no right answer here,” Cole said. “We made the best recommendation. The council is free, as you always are, to make changes in those recommendations. I wanted to underline the dynamic nature of this. We’re trying to push this off to see how the world changes, and we’ll see how the world’s changes will affect Santa Monica’s change.”

According to data from the five taxi cab companies, they have experienced an average 27 percent reduction in trips in 2014 when compared to 2013.