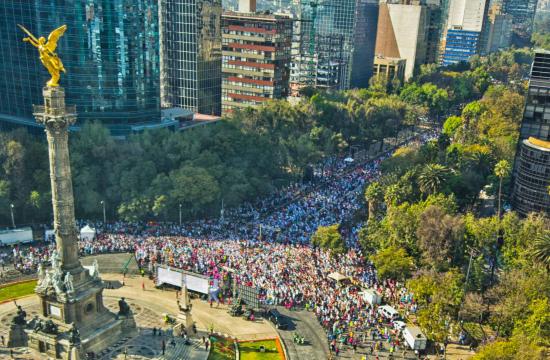 The founder of Santa Monica-based Naam Yoga, Dr. Joseph Michael Levry, will guide tens of thousands of people in a global meditation for peace on Sunday, Nov. 29 at 6:30 am PST in Mexico City.

The event will be livestreamed to potentially unite hundreds of thousands of viewers worldwide in the name of global peace.

This free event for global peace, which gives people worldwide access to join the event livestream simulcast online, has garnered international support and will be livestreaming from key global locations, including cities in Switzerland, Italy, Brazil, Germany, the Czech Republic, Australia, New Zealand, Spain, the USA and Canada.

Guided by Dr. Levry, the fifth annual global meditation for peace ‘Superclass’ will be held in Mexico City at the Angel of Independence monument.

“It is our responsibility to individually and collectively contribute something positive, healing and uplifting to our planet. When a certain number of people come together in meditation, with sacred sound (Naam) while holding the vision of peace, the positive and healing impact is squared by the number of people present,” said Dr. Levry.

To further illustrate this healing impact, the Institute of the Noetic Sciences, dedicated to transformation through consciousness research, states that it takes only the square root of one percent of a population to align their thinking for mass consciousness to change.

These global meditations for peace are gathering momentum each year. The first global meditation for peace, also known as a ‘Superclass’ was held in Mexico City in 2011, with new records of attendance reported each time since then: Zócalo (12,000) in 2011, Revolution Monument (15,000) in 2012 and the Angel of Independence (21,000) in 2014.

Anyone can gain access to the free livestream simulcast at http://lovepeacelighttoall.com.