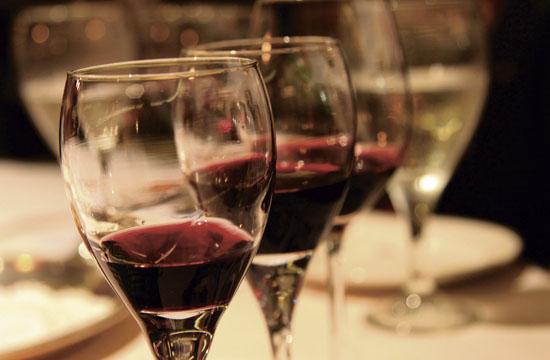 Santa Monica Rotarians switched things up earlier this month. Parting with tradition, Friday’s Rotary Nov. 6 meeting was more like game night at the Riviera Country Club. And last Friday, the meeting is canceled and the annual Wine & Jazz Festival that took place Sunday.

Using last week to celebrate Veterans Day (which was Wednesday Nov. 11), Rotarians paid respect to those who served our country, but also explored the relationship of the film industry to America’s participation in wars.

Interestingly, there was no speech. Instead, there was a competition to test the room’s war-film literacy, using clips generated from Michael and Dianne Rhodes.

Famous in the film industry, the Rhodes are known for their work of incorporating movie clips into educational activities.

“Shortly after 9/11, the Academy reached out to Michael and he put together a montage of film clips demonstrating the virtues of this country and of Americans specifically,” Santa Monica Rotary President Tom Loo said. “That film clip played in 14,000 theaters after 9/11. The Academy ran his film clip for three successive years from 2002-2004. They helped this country with respect to its healing process.”

Michael Rhodes is a five-time Emmy-winning director/producer, president of the nonprofit Film Clips Spirit of America, and the creator of the critically acclaimed and increasingly popular series Hollywood Film Clips for Character Education.

With that introduction, members divvied up into small groups with a pen and paper – sans phones nor tablets – and raced to answer the most questions about the films (title, director, actors, etc.).

Movies ranged from the Old Hollywood classics to Academy Award winners to contemporary favorites. They saw the heart-pumping scene between Jack Nicolson and Tom Cruise in “A Few Good Men.” There was the bloody waterfront battle in Francis Ford Coppola’s “Apocalypse Now.” Then they witnessed the transformative power of Denzel Washington and his motley crew in “Glory.” After many clips, the meeting ended with the final scenes in “Saving Private Ryan.”

In lieu of the weekly Friday Rotary meeting, members geared up for their annual fundraiser for local and international service projects, the Rotary Club of Santa Monica International Wine & Jazz Festival on Sunday, Nov. 15.

The festival is their only annual fundraiser to support the many projects they fund. The 8th annual celebration this year was held at the Museum of Flying at Santa Monica Airport from 2 to 5 pm.

Thanks to the sponsorship of the Fairmont Miramar Hotel & Bungalows, food was provided by FIG of the Fairmont Miramar. Music featured the George Kahn Trio, and a live and silent auction will feature dozens of top-notch items including trips to Italy and Napa Valley, a wine dinner with topflight Bordeaux, Burgundy, Rhone wines and Napa Cabernets, and private airplane and helicopter flights.

The Rotary Club of Santa Monica is a dynamic group of business and civic leaders who have joined together to support local and international causes.

They are a part of Rotary International which has more than 1.2 million members in more than 33,000 clubs worldwide. They are dedicated to “Service Above Self” and members have conducted numerous humanitarian projects in our local community and around the world.