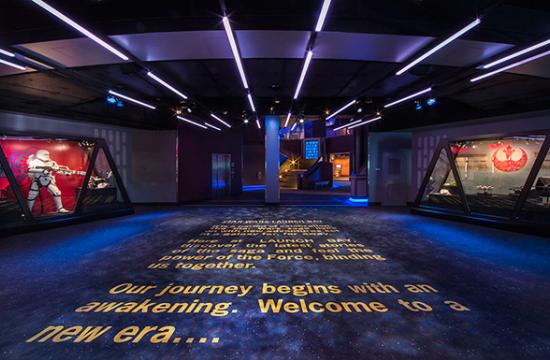 A series of “Star Wars” related-attractions will begin opening at Disneyland Monday in connection with the Dec. 18 release of “Star Wars: The Force Awakens.”

What is being dubbed “Season of the Force” will include the opening of the Star Wars Launch Bay and characters and adventures from “Star Wars: The Force Awakens” incorporated into Star Tours — The Adventures Continue.

The Star Wars Launch Bay in Tomorrowland will include the opportunity to meet Darth Vader or Chewbacca; a theater playing a video of interviews with directors, writers, producers and other key crew members from the “Star Wars” franchise; an area to take pictures near elements of the cantina from the original “Star Wars” film, including a holochess game table; and an area to play video games.

The Space Mountain ride will be dubbed Hyperspace Mountain for a limited time with riders joining a battle between Rebel X-wings and Imperial TIE fighters. The ride also has a new soundtrack.

Favorite scenes from “Star Wars” films, including “Star Wars: The Force Awakens,” will be shown at the Tomorrowland Theater. There will also be special “Star Wars” themed food and beverages, merchandise and entertainment.

A new version of the interactive show “Jedi Training: Trials of the Temple” will open on Dec. 8 with Darth Vader and the Seventh Sister Inquisitor, a new villain from the Disney XD series, “Star Wars Rebels.”

The “Star Wars” presence at Disneyland will continue to grow. Groundbreaking will take place in 2016 for a “Star Wars”-themed land, whose opening date has not been announced.