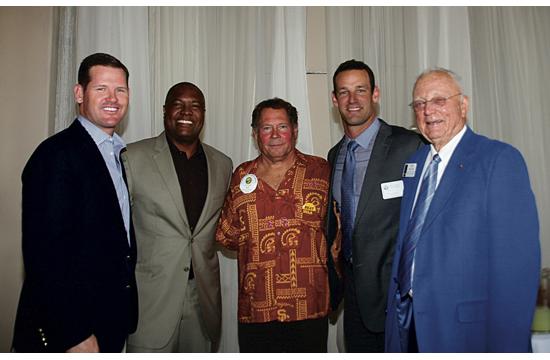 The Santa Monica Rotary Club merged with its sister club in Westwood Village Friday, Nov. 20 to revel in the greatest cross-town rivalry in football: USC vs. UCLA.

With the room decidedly split down the middle between Trojan and Bruin alumni, with a few sparse UC Berkeley Bears and other collegiate outliers, Rotarians rang in the coming end of the college football season, bringing in three marquee players from both schools to find out more about what it’s like to play “in the Big Game” and lead their teams, and colleges, to victory.

McNown, who was drafted in the first round to the Chicago Bears and ended his NFL career with the San Francisco 49ers in 2002, is now in the investment advisory business in Beverly Hills with Lourd Capital Management. When asked whether his football career helped him in his present career, the All-American quarterback called his new life with a wife and four kids “the revised dream.”

“When it comes to work or investing or anything else – discipline and focus and commitment – are all things that you need to be successful in a business career, and those are all certainly things that you development when you’re on a football team,” McNown said.

“Both Rodney and Cade will agree with me that football’s an unbelievable way to kind of set yourself up,” the wide receiver said. “It teaches you how to come together for a common goal.”

After all these years, Farmer still holds the UCLA football record for career receiving yards (3,020).

“I’ve got my best friend from football here and we just had so much fun together,” Farmer said. “Cade will tell you the same thing: we worked really hard, were successful, and had a lot of fun.”

“So I didn’t have to go to spring football,” he joked.

The Bruins and Trojans volleyball rivalry was significant in its own right, Farmer said, adding the team was 4-0 against USC.

“That rivalry was a little bit different. The volleyball community is a lot smaller,” he said.

“Our family is split down the middle,” he said.

Farmer today is an advisor for a boutique life insurance brokerage firm in Beverly Hills, specializing in disability insurance for athletes.

Last up was one of the most famous quarterbacks in USC history, Rodney Peete, now a sports broadcaster for Fox Sports.

Peete lost one game to UCLA in his Trojan career and went on to play 16 years in the NFL, retiring with the Carolina Panthers after going to the Super Bowl XXXVIII.

But according to Peete, his greatest call to fame was marrying one of the neighborhood kids, actress and entertainer Holly Robinson. The husband-and-wife duo will star in their own docuseries “For Peete’s Sake,” announced earlier this year.

University of Arizona, UCLA, and Stanford also pursued Peete before he picked football at USC. The deciding factor? When he was picked up in a black limo with two USC Song Girls in the back and taken to lunch in Marina del Rey.

Rotarians also wanted to know about how Peete managed to play in the 1988 UCLA-USC game just days before he was hospitalized with measles.

“I get asked that question all the time. Was it a trick or tactic to duck focus away from the game and give us an advantage? And I would say we never needed a trick against UCLA. That being said, it was a difficult week.

“But there was never a doubt that I wasn’t going to play. It was just that kind of a game. At that time I think we were 9-0. It was a big deal.”

They ended up winning and played at the Rose Bowl against Michigan State.

“But I certainly felt the adrenaline, felt the crowd, felt the USC fans that helped me through,” Peete said.

On his feelings leading up to the Heisman Trophy announcements where he was named second to Barry Sanders: “Growing up, admiring those who won the trophy in the past, watching that ceremony, you know where it is; you have Downtown Athletic Club embedded in your mind. It’s something that you dream about.”

And Peete’s predictions for next week’s USC/UCLA game at the Coliseum? He foresees 27-20, USC.