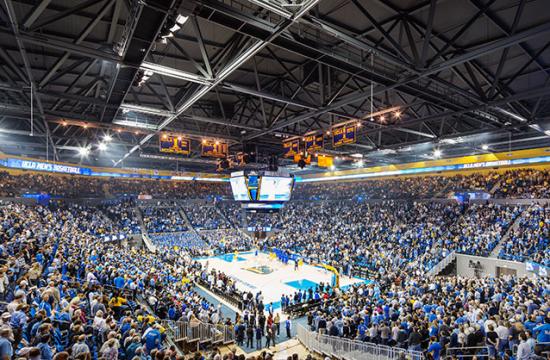 UCLA will celebrate the 50th anniversary of Pauley Pavilion Sunday, including offering tickets in several sections of the arena’s upstairs level for $3.50, the price of a ticket for a game in the 1965-66 season.

Nan Wooden, the daughter of the Bruins late legendary coach John Wooden, will serve as the team’s honorary captain for the nonconference game against Cal State Northridge.

Popular songs from the mid-1960s will be played during breaks in play. Several “fun facts” about the 1960s and UCLA will be displayed on the arena’s video board.

Fans who have held season tickets since Pauley Pavilion’s opening will be honored at halftime, along with members of the family of the late University of California Regent and oilman Edwin W. Pauley, the principal donor to the arena’s building fund.

The celebration comes two days after the 50th anniversary of UCLA’s first game at Pauley Pavilion, when its varsity team, the two-time defending NCAA champions, lost 75-60 to its freshman team led by Lew Alcindor, who would later change his name to Kareem Abdul-Jabbar.

The game will also be the first of this season’s five Junior Bruin Days, where children 12 years old and under can shoot a free throw or layup on Pauley Pavilion’s Nell and John Wooden Court after the game.

Junior Bruin Days also includes a tattoo station, Bruin Kids Club sign- ups and a scavenger hunt contest on the northeast concourse from before the game until halftime and a 20 percent discount on kids gear in the UCLA Store in Ackerman Union from two hours before gametime until the opening tipoff.