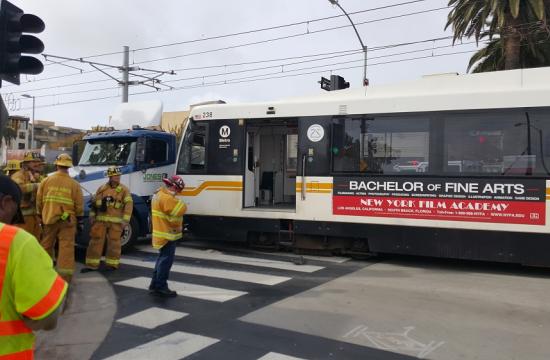 Santa Monica police and fire departments are responding to the first vehicle versus Expo Light Rail Line train collision at noon today at the intersection of Colorado and 7th St.; the driver of the vehicle that was struck has been transported to an area hospital with non-life-threatening injuries.

“They found a tractor trailer carrying a light load of wood attempting to make a turn at the intersection of 7th and Colorado,” Van Sluis said. “The tractor trailer was struck by a Metro Light Rail train. There was one driver of the tractor trailer who was treated at the scene by paramedics and transported to an area hospital for non-life-threatening injuries.”

Van Sluis said said there were four Metro employees on the train, adding two were treated at the scene for minor injuries and did not require hospitalization while the other two did not need any treatment.

He said a joint investigation between Metro and the Santa Monica police and fire departments regarding the accident is currently under way.

“Fire units did have a diesel fuel leak caused by the impact of the train to the tractor trailer and they contained that,” he said. “There are no other hazards or injuries to report.”

Van Sluis said there were no crossing gates at the intersection.

A Santa Monica Police Department watch commander said delays and severe traffic congestion were to be expected for the next few hours.