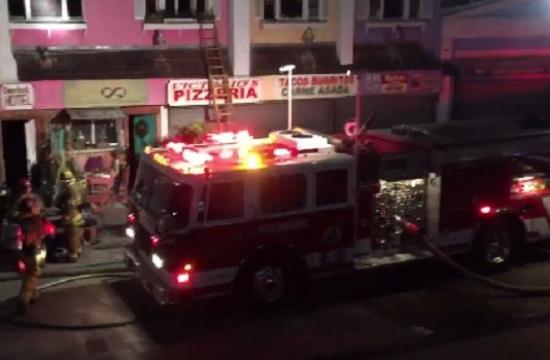 Fire disrupted the Saturday night partying near the Santa Monica pier, when flames broke out in a two-story apartment house on Ocean Front Walk. An employee at Big Dean’s Ocean Front Cafe said the blaze got so close, the bar had to be evacuated.

The fire was reported at about 7:45 p.m. in the 1600 block of Ocean Front Walk, said Santa Monica firefighters.

According to reports, two people were taken to hospital with non-life-threatening injuries. The flames were put out after 33 firefighters battled the blaze for 30 minutes.

A video posted on Twitter by Our Santa Monica indicates the building had shops on the ground floor and apartments on the second floor.