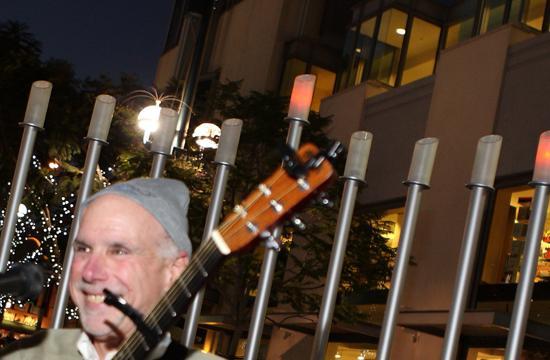 Hanukkah, Judaism’s eight-day commemoration of the temple rededication that followed the Maccabees’ victory over a larger Syrian army in 165 B.C., begins at sundown tonight.

Hanukkah commemorates “the first fight ever for religious freedom,” according to Rabbi Morley T. Feinstein, the president of the Board of Rabbis of Southern California.

“In a world where we have such unfortunately blatant intolerance and such blatant disregard for alternative views, the fact that our ancestors fought for freedom and won allowed freedom to happen for all people,” Feinstein said.

Once the Jews defeated the Hellenist Syrian forces of Antiochus IV at the end of a three-year rebellion, the temple in Jerusalem, which the occupiers had dedicated to the worship of Zeus, was rededicated by Judah Maccabee, who led the insurgency begun by his father, the high priest Mattathias.

According to the story of Hanukkah, Maccabee and his soldiers wanted to light the temple’s ceremonial lamp with ritually pure olive oil as part of their rededication but found only enough oil to burn for one day. The oil, however, burned for eight days in what was held to be a miracle.

Hanukkah — which means dedication in Hebrew — is observed around the world by lighting candles in a special menorah called a Hanukkiah each day at sundown for eight days, with an additional candle added each day.

The reason for the lights is so passers-by should see them and be reminded of the holiday’s miracle.

Other Hanukkah traditions include spinning a dreidel, a four-sided top, which partially commemorates a game that Jews under Greek domination are believed to have played to camouflage their Torah study, and eating foods fried in oil, such as potato pancakes and jelly doughnuts.

“Hanukkah is a home-based holiday with families sitting at the table lighting the Hanukkiah, singing songs, playing games,” Feinstein told City News Service. “It’s no surprise that the two most-beloved Jewish holiday, Hanukkah and Passover, both of which occur in the home.”

Children receive Hanukkah “gelt” (the Yiddish word for money) from parents and grandparents. The tradition originated with 17th century Polish Jews giving money to their children to give their teachers during Hanukkah, which led to parents also giving children money.     In the United States, the practice has evolved into giving holiday gifts to children and others.

The Union of Reform Judaism — of which Feinstein’s Brentwood-based University Synagogue is a member — is asking that on the sixth night of Hanukkah families and individuals donate the value of the gifts (or the gifts themselves) that otherwise would be exchanged on that night to organizations that assist the poor, locally or globally.

Unlike on the High Holy Days of Rosh Hashana, the Jewish new year, or Yom Kippur, the Day of Atonement, observant Jews are permitted to work and attend school during Hanukkah, the only Jewish holiday that commemorates a military victory.