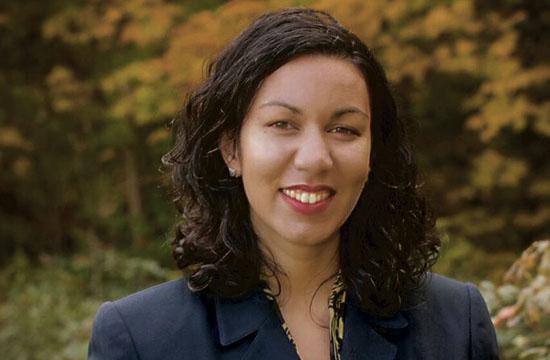 Kesha Ram, a Santa Monican by birth and a prominent student leader in Santa Monica is now a Vermont resident, a member of the Vermont Legislature, and a candidate for Lieutenant Governor in Vermont. She is working her way around the State of Vermont, meeting voters, talking to people and, in her own words, “just generally having a good time.”

It’s early days in this campaign. The election isn’t until Aug. 9, 2016. Believing that “now is the time to have conversations,” Ram was in the living room of Jill Michaels home in Strafford Vermont on Sunday, Dec. 13. That weekend she had also been to Woodstock, Vermont for the Wassail Weekend Horse Parade and Craft Market and in Bellows Falls Vermont to visit with local business people and to attend the Windham County Democratic Committee Awards Dinner.

In Michaels’ living room Ram sat with a dozen or so people, an impressive group including State Treasurer Beth Pearce, a DNC superdelegate, local business people, and individual Straffordites such as Ned Coffin, an eminent member of the Strafford community. They were there to meet the candidate and talk issues.

Called a “kitten in lipstick” in her first Vermont campaign eight years ago Ram said the comment may have been sexist and rude but it gave her the advantage of being underestimated. While others were making snide comments she was talking to people.

“I would sit in everyone’s living room and we would talk about their lives, their families, their stories and their problems,” she said. “I felt, win or lose, it was all worth it because Vermonters have great stories and are so welcoming.”

Registering hundreds of new voters in the process Ram won her seat in the Vermont State Legislature. To put this in context, the City of Burlington – where Ram was running – has a population of 42,284. The population of the entire state is 626,562.

It was Ram’s first bid for public office.

“I was graduating from the University of Vermont,” she said, “and I felt my generation needed a voice.”

Now in the 8th year of holding her part time legislative position she talks about her work: helping to achieve statewide recognition for the Abenaki people – who called Vermont home before the United States was a country; making first time home-buying more affordable; and planning a path to a clean energy future for the State.

“Vermont has over 16,000 jobs supported by renewable energy,” she said. “We are moving toward energy independence and have committed to 90 percent renewable energy by 2050. I want to make sure we stay the course.”

Ram is on the campaign trail for the position of Lieutenant Governor of the State. Ram calls the position one of “Connector-in-Chief.”

Her responsibilities would include presiding over the Senate with fairness and impartiality; traveling the State listening to people; and helping people solve problems by connecting them to other people and agencies and businesses.

“Vermonters can’t afford to pay a Vermont premium on their cost of living while at the same time having a Vermont discount on their wages,” said Ram. “Vermont is a special place to live and people are paying more to live here. Our small villages, our rural resiliency, our natural landscape all give Vermonters a great quality of life and we need to make that work.”

Ram said Vermont has more organic farms per capita than any other State in the Union.

“I understand the real value in sustainable farming,” she said. “My mother was president of Co-Opportunity, a health food cooperative in Santa Monica and my father was the owner of McGinty’s Irish Pub in Santa Monica. I draw on their work.

“My grandmother was a big influence in my life. The Big Blue Bus was our ticket to independence and to go interesting places together. So I understand when Vermont seniors express feelings of isolation because of lack of transportation and it is an issue I want to work on.”

She said her interest in service has been with her all her life.

“When I was in 1st grade I could already read and my teacher had me work with other students who needed help learning to read,” she said. “I gained so much from that experience. By the time I was in the 5th grade at Roosevelt I ran for and won the office of Student Body President.”

Ram is also endorsed by more than 20 of the sitting State Representatives and a long list of community leaders, and it’s early.

Kesha Ram says, “Vermont is now my home. But my commitment to service, learned in my childhood in Santa Monica, is central to my life and I now give my service in Vermont.”

For more information on her campaign, visit kesharam.com.