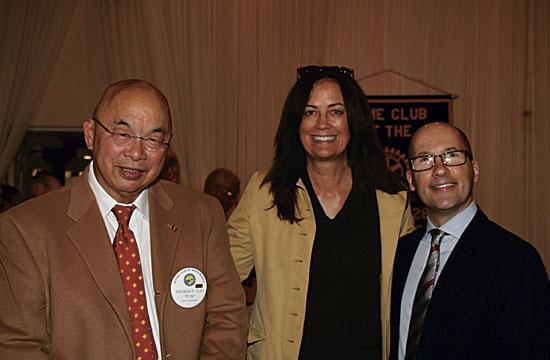 How did New Line Cinema nab Peter Jackson and his vision for the fantastically successful “Lord of the Rings” trilogy?

You might not have heard of him, but Mark Ordesky was the secret sauce to the franchise that would gather 30 Oscar nominations and net nearly $3 billion at the box office.

“The $200 million green light I secured for the ‘Lord of the Rings’ trilogy – which in hindsight might seem like the surest of sure bets – was deemed so improbable, so dangerous that no other studio even bothered to compete for the rights to make the movie,” Ordesky said at the Santa Monica Rotary Club Friday, Dec. 4. “Even at New Line where I was now a senior production executive and passionate ‘Rings’ advocate, there were those who believed the trilogy would be the company’s undoing.”

Yet where did he discover Peter Jackson, future Oscar winner and maestro of Middle-earth, he asked.

It was in a toilet at Republic Pictures.

Ordesky’s self-described “toilet office” was a converted men’s restroom so small that the then-24-year-old could touch both walls at opposite ends. It was there that he had stumbled upon an independent B-movie called “Bad Taste” from a young unknown Kiwi about carnivorous space aliens trying to harvest New Zealanders for food. The Kiwi, Peter Jackson, wrote, directed, starred, and edited the film for four years on nights and weekends.

Ordesky endeavored to secure U.S. distribution rights, but as he would come to find out and treasure, sometimes being told no is a gift.

“Since I had tried and failed to buy ‘Bad Taste’ in 1987, I had gone on to get Peter his first Hollywood job at New Line, writing a sequel of ‘Nightmare on Elm Street’ that never got made,” he recalled.

Part of New Line Cinema in 1999, Ordesky went to a midnight screening of “The Blair Witch Project” at Sundance Film Festival. He had a hunch but was $400,000 short of a competing bid, and the filmmakers went with a more enthusiastic distributor.

That loss seared into his mind forever the lesson of not denying a core instinct when you are fortunate enough to have one, he said.

After he slept on another movie, the Oscar-winning “The Usual Suspects,” he made a vow.

“I decided nothing and no one was going to stop me from seeing the ‘Lord of the Rings’ made – if it was the last thing I did in the film business, so be it,” he said.

A USC journalism grad, Ordesky grew up in the turmoil of the ‘70s, watching Vietnam and Watergate play out on TV. The same place he had watched the moral decay of a nation, he soon discovered films from Clint Eastwood, François Truffaut, Lina Wertmüller, and Monty Python.

“You could sort of say movies saved my soul,” he remembered.

At 13, he devoured the three “Lord of the Rings” books and happily fell down the Tolkien rabbit hole.

“And this is where knowing him from 12 years and believing in him became destiny,” Ordesky said of New Line’s coup locking in the three films.

After all, it was at Ordesky’s tiny apartment that Peter Jackson slept the couch when he came to L.A., where they played Risk all night, and where the auteur witnessed all of Ordesky’s “Lord of the Rings” and Dungeons and Dragons paraphernalia.

“And I had correctly suspected that fantasy films were due for a reinvention because ‘Harry Potter’ was just getting started at this time. It was a perfect storm.”

Nine weeks before the global launch of the first film of the “Lord of the Rings” trilogy, “The Fellowship of the Ring,” the attacks of 9/11 occurred.

“And I remember feeling the horror and impotence and anger of what to do in the face of such evil,” Ordesky recalled.

In that moment, making movies seemed kind of silly and irrelevant to him.

“And I couldn’t have been more wrong. Because this child of Watergate and Vietnam, who fought his own apathy and cynicism with movies, I had in my hands a potent antidote for the children of 9/11,” he said. “I had three movies about four little hobbits who must leave the the Shire and confront Middle-earth’s most darkest elements with a simple notion: that there is some good in this world and it’s worth fighting for.”