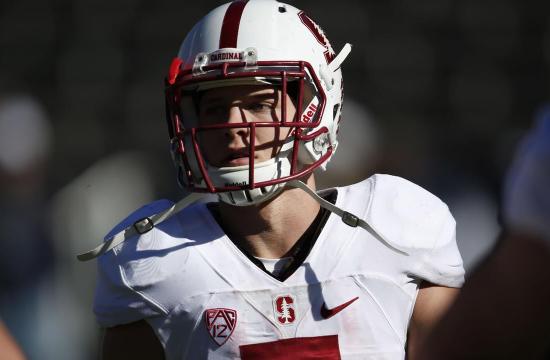 The Stanford football team arrived in Southern California today, then joined Iowa, its opponent in the 102nd Rose Bowl Game New Year’s Day, in a visit to Disney California Adventure.

Cardinal running back Christian McCaffrey, the runner-up in voting for the Heisman Trophy, was making his first visit to the Disneyland Resort and was wearing a button signifying his first-time status.

McCaffrey, who was raised in Colorado, said the closest he had previously gotten to the resort was San Diego.

“I’m just excited the experience in all,” McCaffrey said. “I don’t know what to expect. I’m just going to try to enjoy every ride I can and enjoy accompanying my teammates.”

“It just takes you back to your childhood,” said Hogan, who was part of two previous Disneyland Resort visits by the Cardinal. “It doesn’t matter how old you are.

“We’ve been here a couple of times, but I think this is the most excited that I’ve been coming back here because you never want to take (this experience) for granted because it’s a wonderful experience. This is my last opportunity to come here, so I’m going to enjoy it all I can.”

Hogan said he “loves” the California Screamin’ steel roller coaster and The Twilight Zone Tower of Terror drop dark ride. He said he was excited about the opportunity to ride on the Radiator Springs Racers in Cars Land, which he did not get to do in previous visits.

Iowa receiver Tevaun Smith, said it was “a great experience being with the team” at Disney California Adventure.

“Guys are happy,” said Smith, a native of Toronto. “They’ve never been to California before, let alone be at” Disney California Adventure.