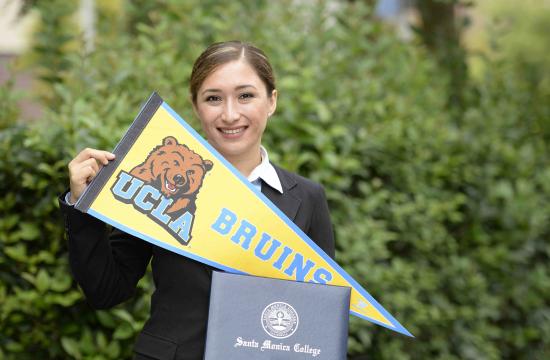 Santa Monica College maintains its hold as California’s No. 1 community college in transferring students to the prestigious University of California (UC) system, for the 25th consecutive year.

This finding came from recent 2014-15 transfer data released by the University of California Information Center. SMC also held the top spot for transfers to the UC and the California State University (CSU) systems combined.

In 2014-15, SMC transferred a total of 1,074 students to the UC, maintaining its hold as the number one transfer institution – by far outranking the No. 2 and No. 3 UC feeder schools, which transferred 816 and 800 students, respectively.

Other statistics for 2014-15 indicate why SMC is considered California’s premier transfer institution:

· SMC regained the top spot for transfers to the UC and CSU systems combined, transferring 2,269 students total to both of California’s public four-year institutions. SMC ranked a close second in the previous year with 2,083 transfers, compared to the top feeder’s 2,152.

· SMC maintained its ranking as the top feeder for transfers to the University of Southern California (USC): 189 students transferred from SMC to USC in fall 2015 (USC reports transfers only for the fall). The next highest feeder to USC sent 95 students.

· SMC was – again – number one in transfers to Loyola Marymount University. SMC is also the top feeder west of the Mississippi to the Ivy League Columbia University and is the second largest feeder nationwide.

“Santa Monica College is thrilled that we are – yet again – number one in transfers,” said Jeffery Shimizu, SMC Interim Superintendent/President. “We are fully committed to preparing all our students for transfer to four-year universities and to equip them to excel, and this latest transfer data confirms our dedication to student success for all.”

“The CSU enrolled a record number of transfers statewide in 2014-15, which is great for our students and for the state of California,” said Nannini. “We are excited to see the University of California accepting 5,000 additional freshmen and transfers – who are California residents – for the 2016-17 academic year. Helping students transfer is a top commitment at Santa Monica College, so it’s wonderful when that also puts us on top with these great transfer numbers!”

SMC’s Transfer Center organizes the largest college fair in the state, conducts workshops, holds weekly visits from four-year institutions, and also has a close working relationship with the UC and CSU to make sure SMC students get credit for their classes.

UCLA continues to be by far the most popular destination for SMC students, with 44 percent of the UC transfers – 476 – going to the Westwood campus. UC Berkeley came in second with 128 transfers, followed by the Irvine and San Diego campuses.

Santa Monica College is a two-year community college accredited by the Western Association of Schools and Colleges (WASC).