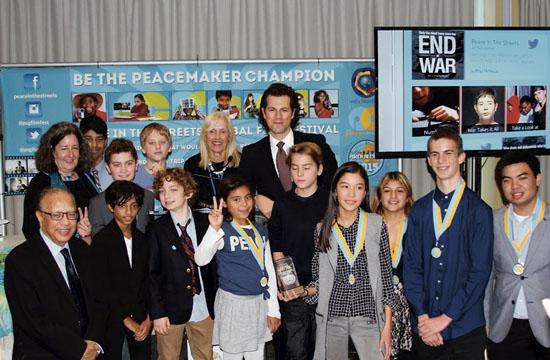 For the culmination of the second annual competition, The Peace in the Streets Global Film Festival honored its winners at the United Nations headquarters in New York City earlier this month, including Santa Monica girl Ruby Maciel who won first place in the under 8 category.

The beauty of this event was the focus on fostering creativity by urging youth 18 and younger to make movies without the pressure of high quality production value.

However, there was a greater focus on critical thinking and creating peace, which is seen by this film festival as an important human right that needs focus in order to be more widely understood.

The competition rules asked youth to submit videos up to five minutes in length through the site without cost.

There were four winners of the 14-18 category, including a tie at third place, and there were three winners in the 9-13 category.

Maciel won first place in the under 8 category for her film “One Way.”

It was her uncle Omar Tapia who inspired her to make the film.

With his guidance, she felt motivated to enter the completion in order to showcase her beliefs. After completing the film, she said she had a deeper understanding of how to keep the streets peaceful. The submission process, as well as the actual event itself, was a nerve-wracking but exciting experience for her. She said the event taught her a lot about peace and how to maintain it.

She said she was excited to attend the United Nations for the award ceremony.

Maciel said she “met so many different people” while in New York City, which she called an inspiring and amazing opportunity.

When attending the conference, she said she “learned about the things they do to keep peace in the streets.”

As a result, she had gained plenty of insight, which affected her deeply. She is grateful to have been able to participate.

Her prize was awarded to her on Dec. 2 in New York City at the United Nations Delegate Dining Room. All winners mingled to share their points of view while also participating in panel discussions and workshops to broaden their horizons at the Paley Media Center the next day on Dec. 3.