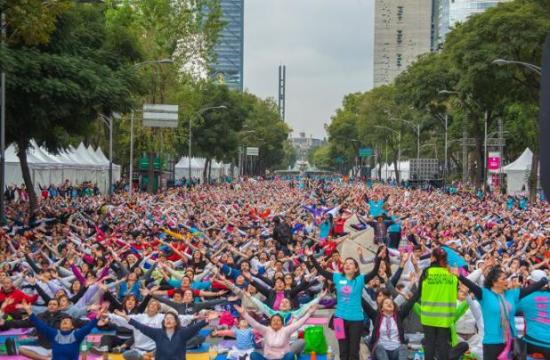 The Angel of Independence in Mexico City was filled to maximum capacity on Sunday, Nov. 29 during the fifth global meditation for peace led by Dr. Joseph Michael Levry, global visionary and founder of Santa Monica-based Naam Yoga.

Thousands of people overflowed into adjacent streets, as an estimated combined number of 100,000 people attended in-person and online, making it the largest gathering of its kind in history.

“It has never been more important than it is right now for the world to envision peace and create it. We are grateful this superclass could create a much needed platform for change uniting so many hearts at one time with one intention: global peace,” said Dr. Levry.

“It is our responsibility to individually and collectively contribute something positive, healing and uplifting to our planet. When a certain number of people come together in meditation, with sacred sound (Naam) while holding the vision of peace, the positive and healing impact is squared by the number of people present. Today we united to create a healing atmosphere of high etheric vibration with love, peace and light. It began in Mexico City and was cast to the four corners of the earth and beyond.”

As the event came to a close, the stage filled with children joining Dr. Levry to send a universal message of healing to the world reciting the Prayer of Love, Peace and Light, the signature prayer of all Naam Yoga classes.

Naam Yoga is the merging of eastern yogic sciences with western mysticism. What is known today as Shakti Naam Yoga, has at its core the ancient and rare practice of Sukshma Vyayama, hardly known to most yogic schools in the western world.

Dr. Levry learned this timeless yogic science from Shri Balmukund Singh, who received it from his teacher Swami Dhirendra Brahmachari, known as the yoga mentor of Indira Gandhi and her father Jawaharlal Nehru, both former prime ministers of India.

This rare and anti-aging practice, originally developed and taught by His Holiness Maharishi Karthikeyaji Maharaj of the Himalayas, was passed onto Swami Dhirendra Brahmachari.

Shri Balmukund Singh is presently known as the successor of this yogic tradition. He is a royal yogic scholar associated with extensive yogic research conducted at the International Center for Yoga Research in New Delhi India, presently known as Morarji Desai National Institute of Yoga, under the ministry of health.

Naam Yoga, whose 501(c)(3), non-profit organization is headquartered in Santa Monica, presents this new form of yoga that incorporates sound, movement, and breathing, increasing the flow of energy in the body to achieve optimal health and well being.