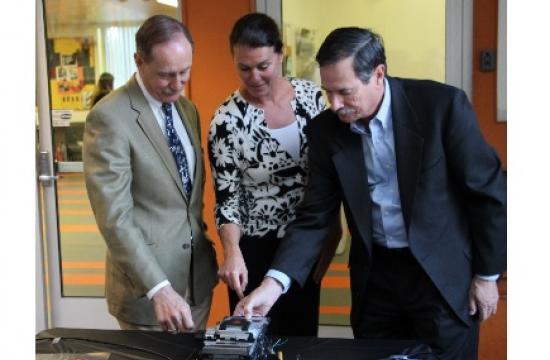 The City of Santa Monica officially launched its Digital Inclusion Pilot on Monday with the connection of the first affordable housing building to CityNet, the City’s fiber optic network.

The Digital Inclusion Pilot offers broadband to residents at speeds up to 10 Gigabits per Second, offering the fastest residential broadband in the nation, to affordable housing buildings in Santa Monica.

Rick Cole, City Manager explains, “Santa Monica is putting universal access as a first priority in our Digital Inclusion Pilot. This is one example of how the city is creating a city that works for everyone.”

The residential broadband pilot is only the latest addition to the Santa Monica CityNet broadband initiative, offering services to businesses for almost a decade.

“CityNet embraces its trailblazer status among broadband providers by leveraging the most current technology to maximize the network’s impact to our community. We continue to set the pace in our community, and the United States, for other providers to follow,” said Jory Wolf, the City of Santa Monica’s Chief Information Officer.

The pilot will serve as a proof of concept to assess the feasibility of expanding CityNet broadband to Santa Monica residents. The multi-dwelling buildings scheduled for the pilot are all affordable housing buildings, many with community rooms used for afterschool programs.

“The City has made a powerful statement by taking concrete steps to close the Digital Divide. In Los Angeles County, 46% of households who earn less than $30,000 per year do not have access to the internet at home. Studies have shown without internet access at home, students have lower graduation rates” said Sarah Letts, Executive Director of Community Corporation of Santa Monica.

Following the FCC’s ruling on Net Neutrality, Universal Access is the current topic of discussion by regulators and public policy advocates.

City Net has received a number of awards including a Government IT Innovator Award from Information Week and a Top 25 Innovations in Government by the Ash Center at Harvard Kennedy School of Government.