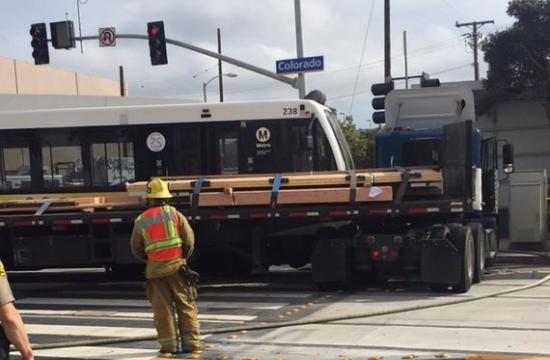 Santa Monica police say the driver of an 18-wheel truck that was struck by a Metro Test Train on Thursday turned onto the tracks against posted signs prohibiting such turns.

The Santa Monica Police Department responded to Colorado Ave. and 7th St. at 11:58 am on Dec. 10 regarding a collision between a train and a truck on the new Expo Light Rail Line.

“The Metro Test Train operated by the Conductor was also travelling westbound on the tracks located in the middle of the roadway, at an unknown distance to the rear of the truck,” Lewis said. “Once at the intersection of Colorado Ave. and 7th St., the driver of the stake bed truck, initiated a left hand turn against posted signs prohibiting such turns, and was struck broadside by the train, causing damage to the truck and its diesel fuel tank and the Metro Test Train to derail.”

The driver of the truck sustained minor injuries and was transported to a local hospital for treatment, Lewis said.

The Metro Expo Line extension from Culver City to Santa Monica is expected to open in spring.

Metro has been testing trains on the track running from Culver City to Santa Monica since April. Officials with the transportation agency have said that during the testing, motorists on streets such as Overland Avenue and Lincoln Boulevard could experience some delays as trains move through the area, crossing gates are lowered and signals activated.

Earlier Thursday, a crossing gate blocked morning traffic on 26th St. south of Olympic Blvd. for about 20 minutes as part of the testing, prompting at least one motorist to get out of his vehicle and ask a law enforcement officer what was causing the delay.