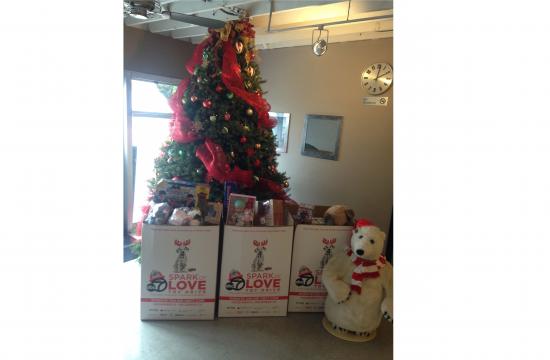 Every year, fire departments all across Southern California collect toys to distribute to needy boys and girls.

This annual holiday toy drive, called “Spark of Love”, runs from Thanksgiving to Christmas. Again this year, the Santa Monica Airport Association, airport supporters and local airport businesses were pleased to partner with the Santa Monica Fire Department to gather toys for Santa Monica’s neediest kids. The SMAA’s participation enabled the local drive to more than double the number of collection points in Santa Monica.

Through the generosity of airport personnel, aviation businesses, pilots, visitors and workers in nearby buildings, four large boxes and over 25 cartons of toys were filled and delivered to the Santa Monica Fire Department’s Spark of Love Toy Drive on Tuesday.

“The Santa Monica Airport Association and the many supporters of Santa Monica Airport always look forward to partnering with the Santa Monica Fire Department on the Spark of Love Toy Drive. We work throughout the year to support efforts to educate local youth and to introduce kids in Santa Monica and surrounding communities to our iconic airport and this holiday toy drive is always rewarding for all involved,” said Bill Worden, SMAA President.