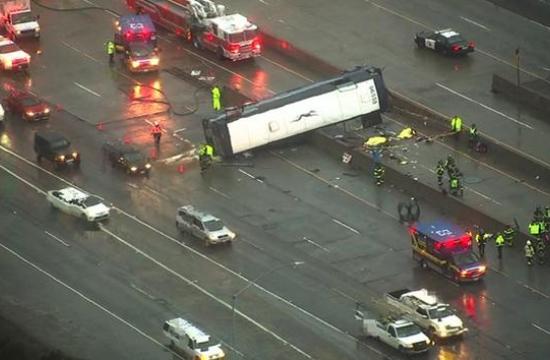 A Greyhound bus crashed this morning at San Jose en route from Los Angeles to San Francisco, killing 2 people and injuring more than 20.

Five of the injured were taken to hospital according to the San Jose Fire Department, with 13 suffering minor injuries.

Two adult females were killed, according to officials and one man with major injuries, as well as three adults with minor injuries and a child, were taken to hospital.

The accident happened just after 6:30 am, northbound on the 101 near Highway 85, according to California Highway Patrol (CHP).

The CHP said the bus was traveling in the northbound HOV lane when it overturned.