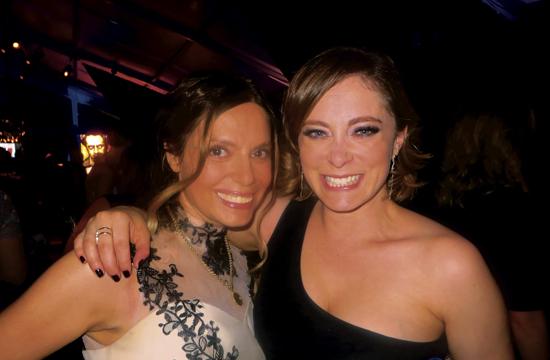 The event was hosted by Actor/Comedian T.J. Miller, “Silicon Valley,” whose off-the-wall improvisation set the tone for the evening, beginning with four life size puppets strapped to his body which mimicked his every move, and ending appropriately (for the Airport’s location, with a nod to the movie “The Martian”) in an astronaut’s space suit.

Comedienne Amy Schumer received the “Critic’s Choice MVP Award”, and also won best Actress In a Comedy with her film “Trainwreck”.  In her acceptance speech, she noted her “area right here” at her middle, and why as an actress she had to “write my own stuff”.

Schumer’s MVP award was certainly well deserved as she, in the words from her introducer and director, Judd Apatow, had, in just one year:  “written and performed for her own TV Show “Inside Amy Schumer,” had a live TV Special at the Apollo theatre, hosted Saturday Night Live, and of course was the lead actress, writer and co-producer of “Trainwreck,” her feature film debut, which has already grossed over $138 million worldwide.”

Santa Monica-based actress Marie Paquim, attended the awards and said that Schumer’s ambition to overcome Hollywood’s limitations on actresses “not quite fitting the mold,” was not dissimilar to her own story.

Hailing from France, Paquim is writing, producing and acting in her latest film, “Land of the Free, Except for Me”. She recently added famed “agent to the stars” Jerry Zeitman as her new manager and executive producer.

Paquim said that a constant theme in this year’s acceptance speeches was Hollywood’s new acceptance of female characters “with complexity,” stating that the recognition was “a huge step forward.”

“This year the critics chose a majority of films which didn’t have the typical happy ending, and in fact were for the most part very dark, like “The Revenant,” “The Room” and “Son of Saul,” Paquim added.

“Now I really feel the American audience is demanding to see stories that are real, whether funny or sad – to see the true colors,” she said.

One highlight of the awards was the acceptance speech of Best Young Actor winner Jacob Tremblay “Room.” “It must be a super hard vote because of all the other great actors in this category,” the 9-year-old said.

Award presenter Bradley James, (TV series “Merlin” and the new “Underworld 5”), made sure to tilt the microphone down, so the dapperly-dressed youngster could easily speak into the mic.

Sylvester Stallone, who received a standing ovation, made a special emphasis, after his Golden Globes miss, to thank his director Ryan Coogler.

The biggest winner of the evening was “Mad Max: Fury Road,” which came away with nine awards, including Best Director George Miller, and Best Actor and Actress in an Action Movie, Charlize Theron and Tom Hardy.

Best Picture and Best Ensemble awards to “Spotlight”, starring Mark Ruffalo. Leonardo DiCaprio, who won for Best Actor in a Film, was absent, promoting “The Revenant” in Europe, but supplied a gracious pre-recorded acceptance speech, thanking the cast and crew and, like most of the honorees, the critics.