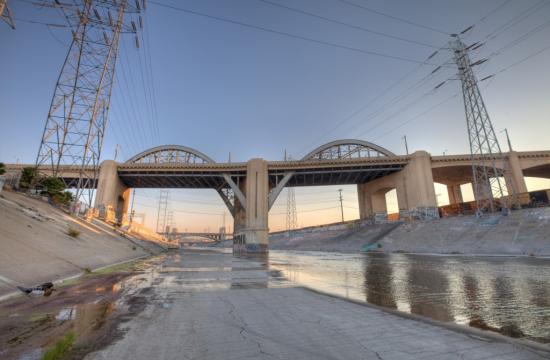 The Sixth Street Viaduct, a Los Angeles landmark famous for its appearances in films such as "Grease" and "Terminator 2: Judgment Day," was closed to traffic yesterday in preparation for its demolition next week.

Bureau of Engineering crews are preparing the bridge for the demolition work, which is set to begin Feb. 5 and will necessitate a 40-hour closure of the Hollywood (101) Freeway.

A crowd of about 100 people gathered on the bridge Tuesday night to take photos and view a car club meet-up in advance of the bridge’s closure. The spontaneous gathering was dispersed after Los Angeles police officers turned out in force to move the people off the bridge so city crews could begin putting up fencing to keep the span clear.

At least one person was arrested, but most of the people who came out to see the bridge were peaceful and just wanted to get pictures, police said.

Councilman Jose Huizar, whose district includes the bridge, took a "final walk" along the bridge this morning with City Engineer Gary Lee Moore and the designer of its replacement, Michael Maltzan.

For Eastside residents who used it to commute to jobs in downtown Los Angeles, the bridge "represented opportunity," Huizar told City News Service.

Huizar said that like many residents, he is "a bit sad, nostalgic, but at the same time optimistic about the new bridge."

The new bridge design includes "beautiful vista points" as well as a community plaza underneath that will make it "a destination point, not only a means to get over the river," he said.

One arch from the old bridge will be preserved during demolition and used in the community space beneath the bridge, according to Rick Coca, an aide to Huizar.

Huizar urged the public to adjust their traffic habits now that the bridge is closed and a 40-hour freeway closure is set to begin next week.

Huizar will join Mayor Eric Garcetti and other officials later this afternoon to discuss details about closures and detours related to the demolition.

Drivers going west on the Pomona (60) Freeway out of Pomona will not be able to get onto the 101.

Demolition work is expected to last about nine months and be followed by a $449 million project to build a replacement bridge. The new bridge is anticipated to be completed by 2019 at the earliest.

Maltzan’s design of the new bridge includes references to the current bridge, including 10 pairs of arches.

The bridge, which joins Boyle Heights with downtown Los Angeles, is being replaced due to deterioration caused by a chemical reaction in the concrete.

The bridge was built in 1932 and has been seen in dozens of movies, including two "Terminator" films, "Horrible Bosses," "The Mask," "Furious 7," "The Mask," "Point Blank" and "To Live and Die in L.A." It is featured prominently in a classic race scene in "Grease." A number of musicians have filmed videos on or around the bridge, including Madonna, Chris Brown, Kanye West, Avril Lavigne, Foo Fighters nan Pharrell Williams.