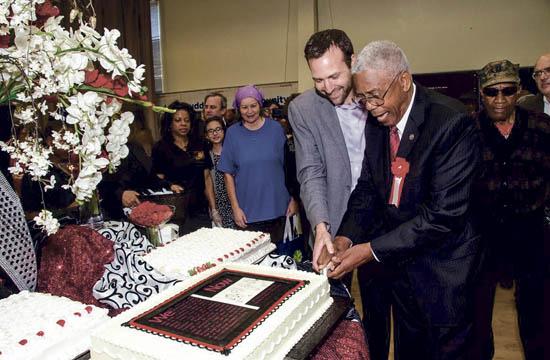 Martin Luther King Day will be marked this morning in Santa Monica when 31st-Anniversary Celebrations continue as part of a three-day long event, organized by the MLK Westside Coalition.

Embracing the theme “Peace Requires Justice,” this year’s celebration features entertainment by the Claudia Lennear Gospel Trio and Get Lit-Words Ignite, with an opening act performed by the Keali’i O’Nalani Dancers.

Beginning at 9am Monday, January 18, at the SGI Auditorium, the event is part of a comprehensive celebratory program and sees Supervisor Sheila Kuehl as keynote speaker.

Claudia Lennear is an American soul singer who has worked with renowned acts including Ike and Tina Turner and Joe Cocker. She is a songwriter, recording artist and actor.

“Over four decades, she has captivated audiences as one of the greatest background singers in the era of modern popular music. She is joined by Isy Martin, Jr. and Steve Nieves, two outstanding musicians, singers, and songwriters who have done recording, singing, and co-production work for the highly acclaimed R&B Motown record producer Norman Whitfield,” organizers said.

Get Lit-Words Ignite was founded by Diane Luby Lane in 2006, and is a nationally-recognized organization helping to stem dropout rates and spark increased literacy among youth. The Get Lit Players and their in-house troupe of teen poets, have reached international renown by spitting their raw, fearless truth. “In Los Angeles alone, they have performed for 20,000 of their peers, igniting teens all over LA to transform their education and their lives through art and social consciousness,” organizers explained.

Of special significance, the Keali’i O’Nalani Dancers will open the celebration. On March 21, 1965, Dr. King and civil rights activists wore garlands of fresh flowers when preparing to march across the Edmund Pettus Bridge. The goal was safe passage from Selma, Alabama, and onward to the State Capitol at Montgomery. In the photographic record of this historic 54-mile march, Dr. King, John Lewis and other voting rights demonstrators can be seen wearing the traditional Hawaiian lei.

“Here is the backstory of this seemingly unusual and symbolic appearance of Hawaiian culture that reveals the lasting connection of Aloha-the Hawaiian word meaning compassion, peace and love-to the civil rights movement ever since that day at the bridge,” organizers said.

The 2016 Community Light Award recipient is being presented to FAME Santa Monica Redevelopment Corporation. “The MLK Westside Coalition is pleased to recognize FSMRC as a model of advocacy, collaboration, planning and implementation in its partnering with Squier Properties and the City of Santa Monica to create affordable housing for low income seniors in the Pico Neighborhood,” organizers stated.

The 2016 MLK Education Awards will also be presented to six students of Santa Monica Community College and one high school senior.

Monday’s event will be followed by a Community Involvement Fair at the SGI Youth Center, from 10.30am-noon. A host of community organizations will be on hand with refreshments and door prizes promised.

The event is free and co-sponsored by the City of Santa Monica, SGI-USA, SMC Associates, Santa Monica College, RAND Corporation and CityTV-Santa Monica.