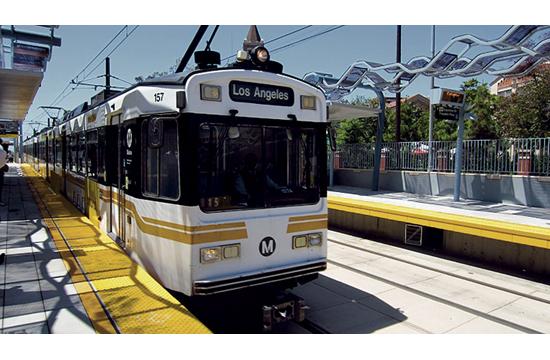 A sizeable collection of residents gathered at Santa Monica’s Main Library Auditorium Wednesday night to take part in Metro’s “It’s Time To Take Part in the Metro Line” meeting. The lack of road barriers, confusing turn signs, limited parking, and the question of educating tourists and homeless people in Santa Monica were the leading issues of concern raised. Beginning with a presentation from Metro outlining the new service, scheduled now to begin in May this year, the evening saw hands quickly raised when the floor opened up to questions.

“There’s no physical way to retrofit and add gates” along Colorado, City staff said. “There’s physically no room to have the street and the gates,” he said. “There’s just no space to put in the gates.”

No Left Turn or U Turn on Colorado

One resident outlined his experience of almost getting stuck on the tracks due to confusing turn signs, citing an instance where he saw another motorist driving along the tracks after also misunderstanding the signs. He was told that there will be more community education and public outreach to address this.

Metro pledged a reach out to homeless via shelters, and explained that there will be around 20 safety ambassadors stationed up and down the line to help people crossing and with directions.

City staff acknowledged the issue of limited parking, (one 70-spot Metro parking lot adjacent to the 17th street station) telling residents that he was just the messenger and that that City is looking at developing more parking in the future. “It is
the City policy to encourage other ways to get to the station,” he said.