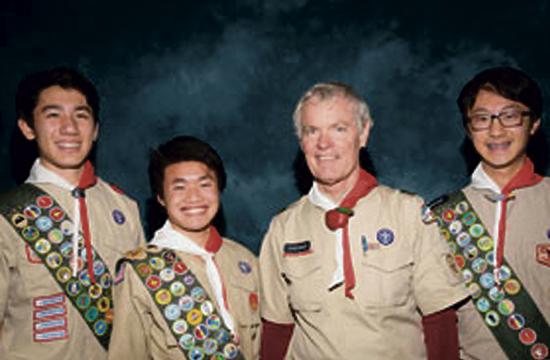 Three Santa Monica teenagers will be awarded the highest rank one can earn in the Boy Scouts of America this weekend.

Ryan Han, Kai Richard McNamee, and Jonathan Huy Trinh will be honored with the rank of Eagle Scout at the Troop 2 Eagle Court of Honor to be held Sunday at the Church of Jesus Christ of Latter-day Saints in Santa Monica.

The Eagle rank honors exemplary effort, leadership, and service. Only two percent of Boy Scouts achieve the rank of Eagle.

Each of the scouts being honored led a major project to improve quality of life in the community. Ryan Han led a team of scouts in repainting the parking lot, including the parking space lines, letters, numbers, and arrows at the John Wayne Cancer Institute in Santa Monica.

Kai Richard McNamee designed and led the construction of a movable performance stage for New West Charter School and catalogued books for the school’s library.

Jonathan Huy Trinh led the restoration of the perimeter fence and gate at Mount Olive Church Preschool in Santa Monica, greatly enhancing the exterior of the church and preschool. The troop’s scouts contributed several hundred hours to these community service projects.

Troop 2 is one of the oldest and largest Boy Scout troops in the Western United States. In its 69-year history, Troop 2 has graduated 328 Eagle Scouts and traveled to scout camps and high adventure destinations throughout the United States. Troop 2 Scouts are known to have saved at least 56 lives.