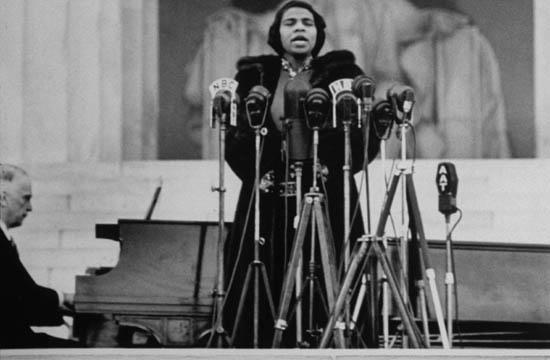 Held at the SGI Auditorium Santa Monica, the event was made possible by the prestigious National Endowment for the Arts (NEA) 2016 Art Works Grant.

The NEA grant underwrote the concert, which recreated the historic 1939 performance of Marian Anderson on the steps of the Lincoln Memorial, an event that Time Magazine called, “The concert that sparked the Civil Rights Movement.” Soprano Caroline McKenzie and the Symphony will replicate Ms. Anderson’s program of arias, spirituals and patriotic songs.

As part of the event, Dr. Robin Kelley, UCLA Distinguished Professor of History and author of “Thelonious Monk: The Life and Times of an American Original,” presented a historical perspective on Marian Anderson, her 1939 concert and the climate of the time.

The concert opened with Ms. McKenzie performing “America”, better known as “My Country Tis of Thee”, just as Marian Anderson did in 1939. She then sung the entire 1939 concert program which includes “O Mio Fernando” from Donizettti’s “La Favorita”, Schubert’s “Ave Maria” and the spirituals “Gospel Train”, “Deep River”, “Sometimes I Feel Like a Motherless Child” and “My Soul’s Been Anchored in the Lord”.

“It was no simple matter finding someone to fill the shoes of Marian Anderson”, said Guido Lamell, Music Director and Conductor of the Santa Monica Symphony. “We are thrilled to have found Caroline McKenzie, one of the great voices on the concert stage today. There could be no better choice.”

In 1939 Marian Anderson was an internationally celebrated classical singer, Sibelius had written for her and Toscanini said she had a voice “heard once in a hundred years.” In spite of her fame and critical acclaim she was refused permission by the Daughters of the American Revolution (DAR) to sing before an integrated audience in Constitution Hall in Washington, D.C. This refusal called forth a burst of protest.

First Lady Eleanor Roosevelt resigned from the DAR as a result of the refusal, and was instrumental in organizing a concert on the steps of the Lincoln Memorial attended by some 75,000 people. The concert was radio broadcast to an audience of millions and a 10-year-old Martin Luther King, Jr. heard it and later said it was a formative experience for him.

The concert concluded with a sing-along of the civil rights anthem, “We Shall Overcome.” The audience joined the Symphony and Ms. McKenzie in this annual tradition, singing the song of solidarity embraced by the Civil Rights movement and Dr. King.

“We are honored to be able to host the Santa Monica Symphony and are especially excited about this year’s program honoring Marian Anderson and commemorating Dr. King’s Birthday”, said Ian McIlraith, Director of Peace and Community Relations at SGI.

The Symphony concert was part of a weekend of events sponsored by the Martin Luther King Westside Coalition. The theme for this year’s celebratory weekend is: “Peace Requires Justice.” Weekend activities begin with an Interfaith Prayer Breakfast on Friday morning, continue with the Symphony concert Saturday afternoon and conclude with a celebration and Community Involvement Fair on Monday, January 18. For more information please visit: www.facebook.com/mlkwestsidecoalition.

The MLK Westside Coalition was founded in 1985 and numbers more than 40 community partners including the City of Santa Monica, Santa Monica College, the Westside Interfaith Council and the Santa Monica-Venice branch of the NAACP.

“The Santa Monica Symphony continues to be one of the highlights of our weekend of celebrations,” said Darlene Evans, President of the MLK Westside Coalition. “We are very pleased the Symphony received a well-deserved NEA grant for this year’s concert and we await the concert with great anticipation.”

SGI Auditorium is located at 525 Wilshire Blvd, Santa Monica As with all Santa Monica Symphony events, admission is free. Concert parking is also free in the structure at 1212 7th St., just south of Wilshire Blvd.

The Symphony’s final two concerts of the 2015-2016 season are Saturday, March 12 and Sunday May 29, both at Barnum Hall on the campus of Santa Monica High School.